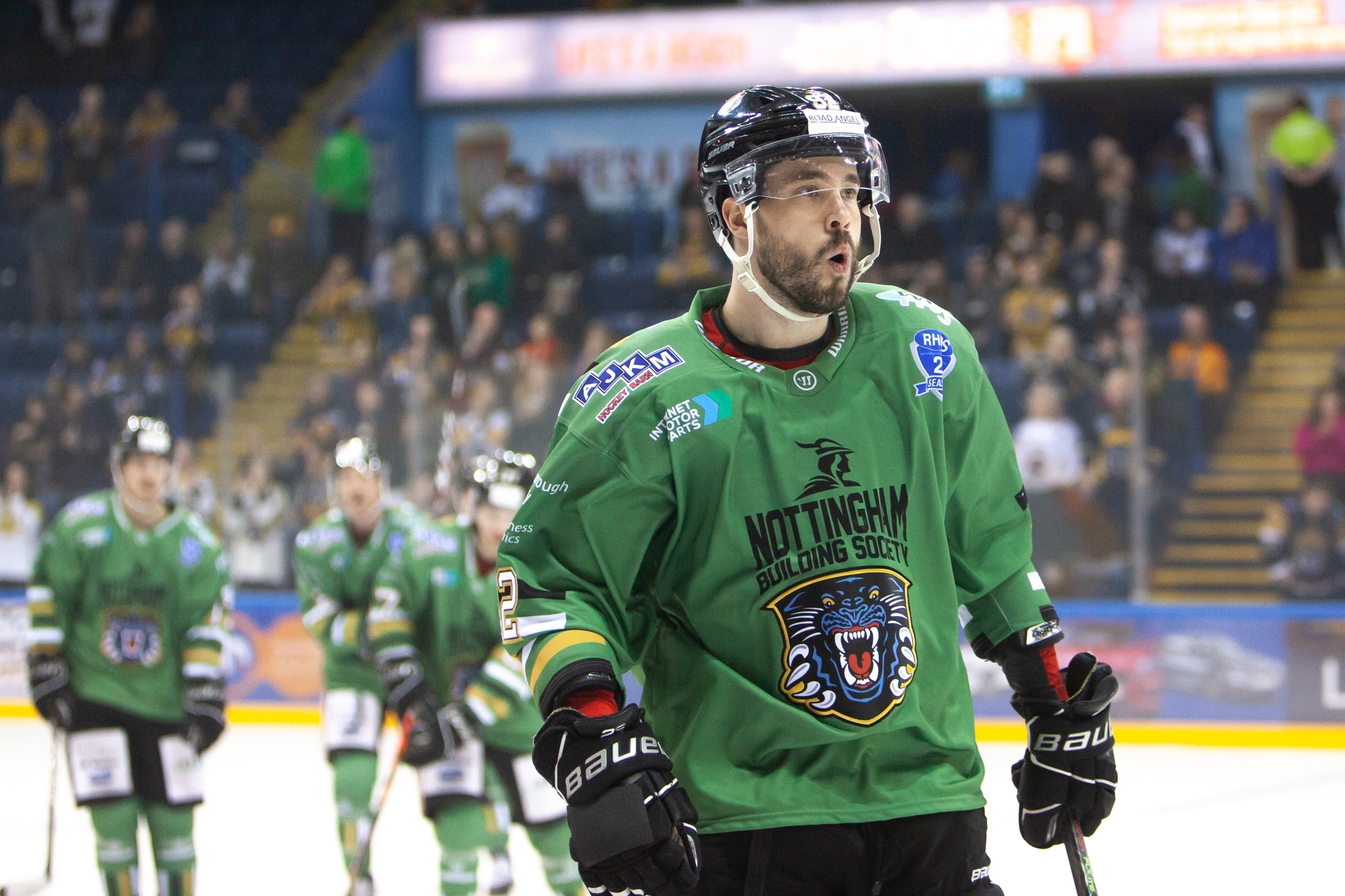 THE NOTTINGHAM Panthers and Guildford Flames locked horns for the second time in four days on Wednesday night, this time in the first leg of their Challenge Cup Quarterfinal match-up.

The Panthers' netminder was the busier of the two early on as the Flames looked to start where they left off on Sunday afternoon and the visitors soon found themselves on the powerplay. The penalty kill unit, and Carr, stood firm though and the home team returned to full strength.

Former Panther Erik Lindhagen was sent to the box for slashing (8.27) and quick thinking from Kevin Carr caught the Flames on a line change by springing Jake Hansen down the right wing, he then found Sam Herr (9.11) who beat Peeters down low on the backhand to put the Panthers into the lead.

Things got better for the Panthers when Peeters spilled Danny Fick's slapshot and Brett Bulmer (13.24) was on hand to stuff the rebound into the back of the Flames goal.

Just over a minute later the home team were up by three, Captain Sam Herr stealing in behind the Flames' defence and sliding the puck through the five-hole of Peeters to send the Panthers into the first intermission holding a three-goal lead.

Gui Lepine dropped with gloves Corbin Baldwin early in the second period (21.54) and made short work of the Flames' man, bringing the crowd inside the Motorpoint Arena to it's feet.

The Flames pulled one back through Ian Watters (23.40), the forward finishing off a pretty pasing play after a turnover in the defensive zone.

It didn't take long for the Panthers to answer back though, Brett Perlini (24.36) finding a bobbling puck and stuffing it beyond Peeters to restore the three-goal lead. The goal was reviewed but after a quick chat the on-ice call stood.

There was time for another bout of fisticuffs before the period came to close, this time Jake Hansen dropping the gloves with Brett Ferguson (37.40) next to the Flames' goal and the Panthers went into the second intermission as they did the first, up by three goals.

Jon Rheault (43.00) padded the Panthers' lead on an early third period powerplay, the forward finding the puck at the side of the net and sliding it beyond a stranded Peeters.

Nottingham killed a high-sticking penalty to Jake Hansen (50.00), Carr standing tall to deny the Flames just as their powerplay came to a close.

A two minute spell of four-on-four hockey, with Hansen and Baldwin in the box, didn't produce a goal, Carr making sure of that with a tremendous kick save on Watters, and the Panthers went into the final two minutes of the game holding their lead.

A last minute penalty to Ryan Horvat saw the Panthers have to see out the remainder of the game of the penalty kill but they kept the Flames at bay and skated out of the first leg of the Challenge Cup Quarterfinal with a four goal lead.