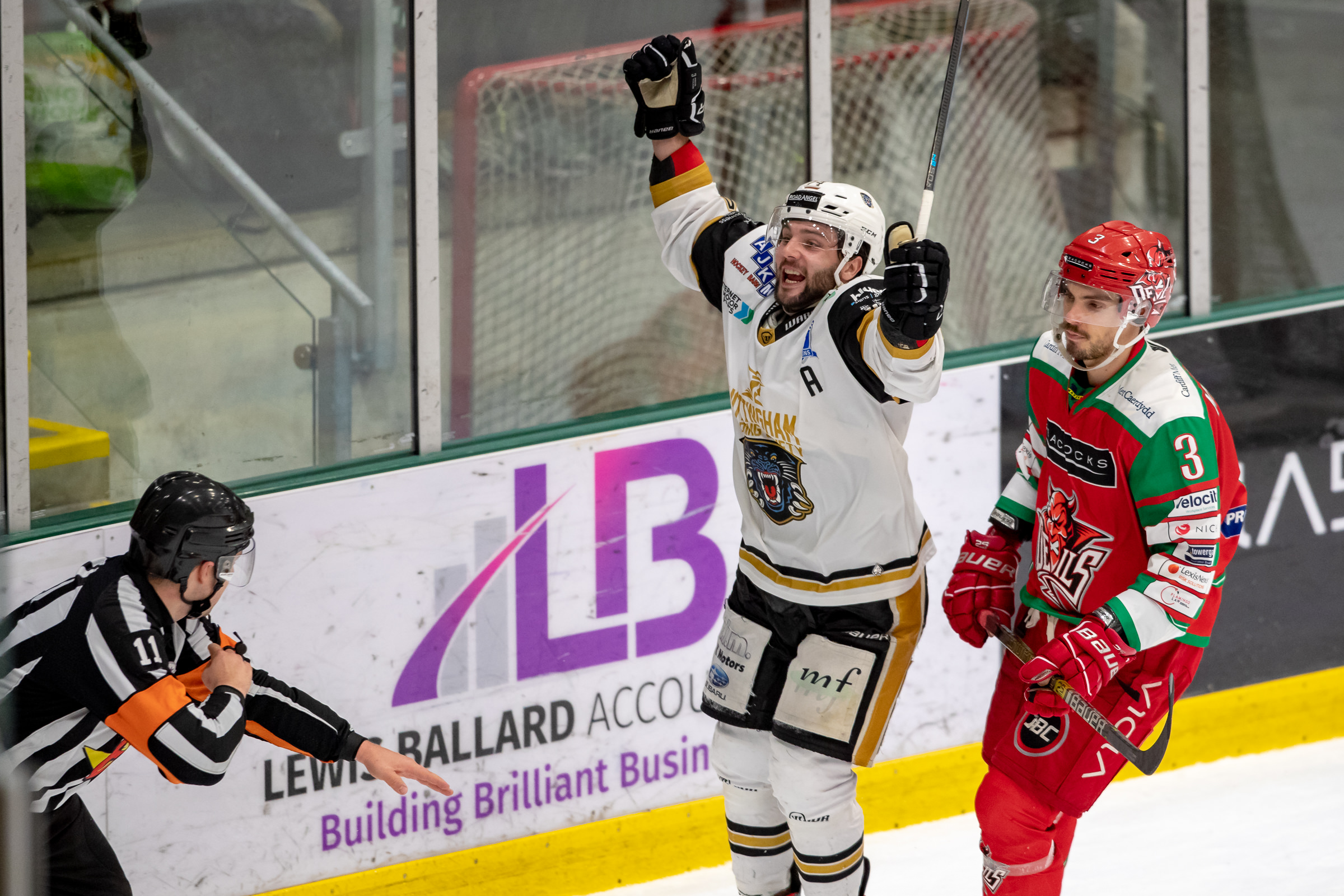 THE NOTTINGHAM Panthers and Cardiff Devils locked horns in a game of the season contender in South Wales on Saturday night.

Kevin Carr got the start in goal for the Panthers opposite Ben Bowns for the Devils.

Nottingham had to kill a penalty to Danny Fick inside the first minute and the teams traded powerplay opportunities, with no success, before the game was five minutes old.

Just after the period crossed the halfway stage Mark Matheson (11.18) put the Panthers into the lead, the defenceman finding a juicy rebound in the slot after Bowns couldn't direct Sam Herr's shot from the blue line to safety.

Cardiff pressed as the first period came to a close and Kevin Carr had to be at best to keep the Panthers in the lead, stretching out his left pad to deny Joey Martin on the doorstep, going into the first intermission.

In similar fashion to the first the Panthers had to kill an early second period powerplay for the home team but once they returned to full strength they doubled their advantage. Jullian Talbot (25.40) firing a quick slapshot beyond Bowns, with Brett Bulmer providing the screen in front, to bring the away fans to their feet.

After the game crossed the 30 minute mark the Devils started to put on the pressure and it told when Matt Pope (33.57) took advantage of a turnover in the defensive zone and beat Carr with a wicked one-timer, pulling the home team within one.

Carr had to deny Martin's one-timer shortly after the Devils' goal before sticking out his pad to keep Linglet at bay.

Robert Lachowicz denied the Devils a certain equaliser when he poked the puck away from a man all alone at the back door and Carr had to be at his best once again to deny Pope and Martin, flashing the leather to keep out the Devils' captain, to send the Panthers into the third period holding their one goal advantage.

Martin got a breakaway early in the third period but a diving poke-check by the returning Georgs Golovkovs prevented him getting his shot away and the puck trickled to safety in the corner.

Herr, Rheault, Bulmer and Hansen all came close to restoring the Panthers two-goal lead but it was the Devils who struck. Gleason Fournier (53.20) firing a backhand effort through a crowd and past Carr to tie the game at two.

Lachowicz and Golovkovs came close to regulation time winners for the Panthers but with no way through both teams secured a point and the game went to overtime.

Nottingham went to the powerplay in overtime, after Brett Bulmer was slashed en route to goal, but that was wiped out when Joey Martin went down easily along the boards and the Devils went to a powerplay of their own.

The Panthers, whilst short-handed, turned a defensive zone face-off into an attack and Jullian Talbot sprang Ollie Betteridge who beat Bowns through the five-hole to secure a dramatic road victory.