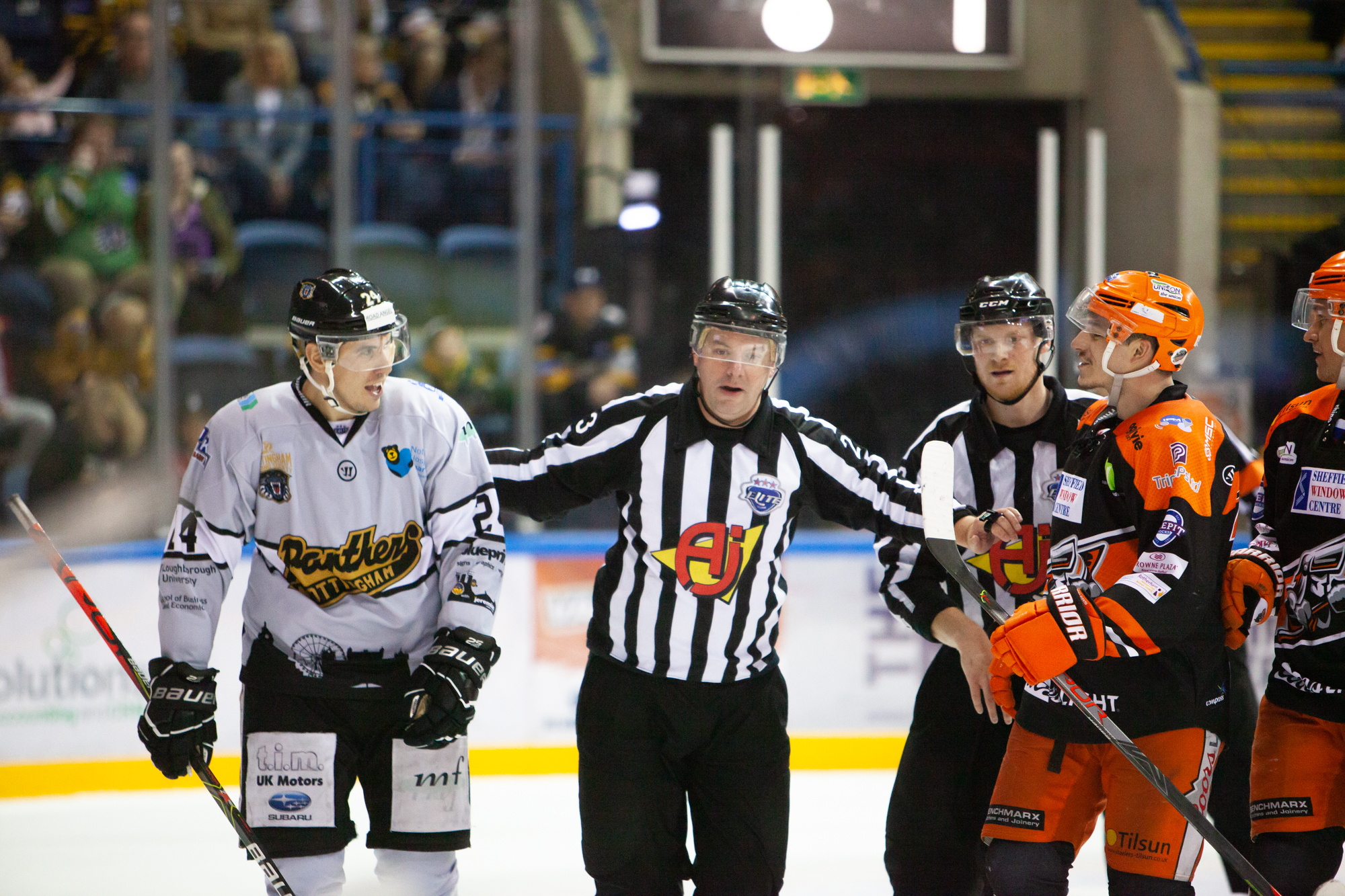 THE NOTTINGHAM PANTHERS CLOSED OUT THE DECADE WITH A CLASH AGAINST ARCH-RIVALS SHEFFIELD INSIDE THE MOTORPOINT ARENA IN NOTTINGHAM.

Kevin Carr got the start between the pipes for the Panthers opposite Tomas Duba for the Steelers.

The Panthers' netminder had to be sharp with his right pad early to deny Brendan Connolly before Jake Hansen, Robert Lachowicz and Dylan Malmquist all came close to putting the home side into the lead.

Captain Sam Herr, returning to the scene of his heroic Boxing Day efforts, rang the post after dancing around a defenceman as the Panthers continued to have no early puck luck.

The physicality of the game started to ramp up as the period wore on, Brett Bulmer and Ryan Horvat in the thick of things as the home side continued to dominate the game.

Carr denied Sandtrom as the Steelers made a rare entry into the Panthers' zone before Nottingham got the games first powerplay. Despite hemming the Steelers in their own zone they couldn't forge ahead and somehow the sides went into the first intermission tied at zero.

Georgs Golovkovs (24.46) brought the Mototpoint Arena to it's feet when he tipped Adam Deutsch's shot from the point beyond Duba to put the Panthers into the lead early in the second period.

Four minutes later the Steelers would draw level. Michael Davies (28.47) winning the face-off fresh off of a TV time-out and applying the finishing touch in the slot as he got a deflection on a slot from the point.

Marc-Oliver Vallerand got into it with Gui Lepine along the boards but came out the wrong end of the exchange, the Panthers' big French-Canadian standing his ground and skating off for a line change with the Steelers sat on the ice.

A broken play around the crease of Carr saw Davies (35.48) get his second of the game and it was the visitors who went into the second intermission holding a one-goal advantage.

Nottingham had to kill a penalty to Golovkovs to begin the period and when the teams were at full strength Mark Matheson tested Duba with a shot from the blue line only to be denied by the Steelers' netminder.

Sheffield broke in two-on-one with Carr only for the Canadian to make a tremendous save moving side-to-side to keep the Panthers within touching distance going into the games final TV time-out.

Another breakdown in coverage off of a clean face-off win for the Steelers proved disastrous for the Panthers, Jonathan Phillips (49.10) finding himself with the freedom of the Motorpoint Arena to one-time the puck into the back of Carr's net.

The game's final ten minutes saw the Panthers pressure the Steelers' goal relentlessly. Brett Bulmer, Jason DeSantis and Jullian Talbot all seeing their efforts test, but ultimately be turned aside by, Duba.

With just under five minutes remaining Mark Matheson (55.02), increasing his point-scoring streak to nine straight games, fired a laser through traffic into the top of the Steelers' goal to give the Panthers hope of another holiday season comeback.

There was to be no comeback though, despite the best efforts of Brett Bulmer who forced Duba into a very good late save, and the Steelers took the two Elite League points on offer.