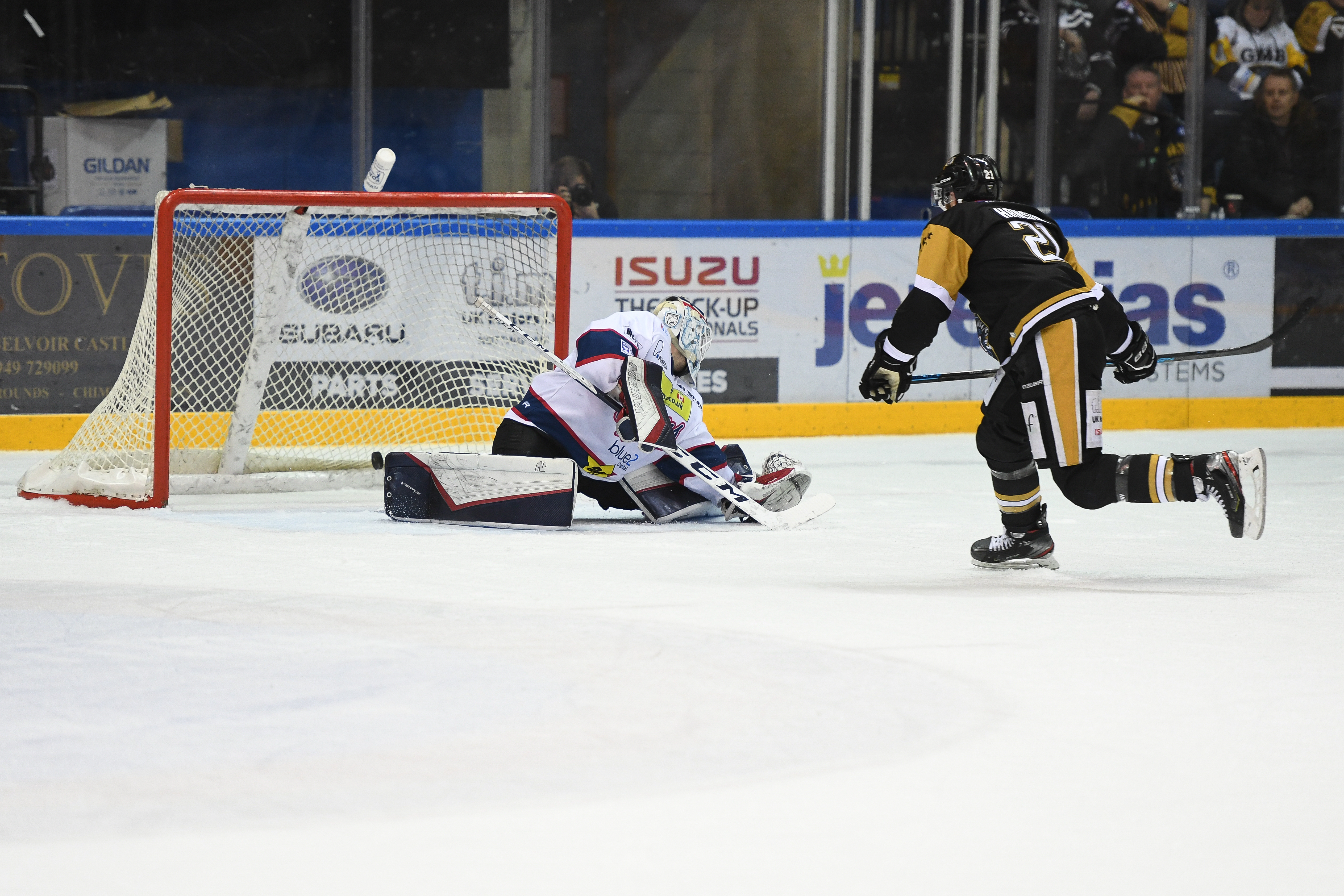 THE NOTTINGHAM Panthers took on the Dundee Stars to face-off 2020 inside the Motorpoint Arena in front of a bumper Saturday night crowd.

Jackson Whistle, Nottingham, and Alex LeCLerc, Dundee, got the starts in goal for their respective sides.

Dylan Malmquist (3.10) got a rampant Panthers team off to the perfect start when he swept home a rebound in the slot.

Things got even better for the home side when Captain Sam Herr (7.14) fired a one-timer, after Player/Assistant-Coach Mark Matheson showed great poise and patience to tee him up, beyond LeClerc to force Stars’ Head Coach Omar Pacha to use his time-out and read his troops the riot act.

The time-out didn’t have the desired effect though and the Panthers immediately added a third. Dylan Malmquist (7.37) bundling home on the doorstep to bring the home fans to their feet once again.

Dundee didn’t die wondering though and former Sheffield Steelers Matt Marquardt (9.41) converted on a two-on-one break in to give the visitors some life.

Jullian Talbot hit the post and Jason DeSantis forced LeClerc into a blocker save just prior to the Panthers going onto their first powerplay of the night, 11 seconds into that powerplay Dundee pulled within one when Colton Kroeker (14.27) broke in and finished high on Whistle short-handed.

Dundee killed the remainder of the penalty, and another Panthers’ powerplay late in the period, and a high-scoring first came to a close with the home side holding a one-goal lead.

Whistle had to be alert to keep the Stars out early in the second period, former Panther Matt Carter testing the netminder at his near post.

On their second penalty kill of the period the Panthers thought they’d restored a two-goal cushion short-handed, Ryan Horvat poking a puck that was between the legs of LeClerc and on show to the entire Motorpoint Arena over the line only for it to be ruled out due to a very quick whistle from the officials.

Nottingham killed the penalty but Dundee, buoyed by their stroke of luck, struck before second came to a close when Jagger Dirk (36.37) beat a stranded Jackson Whistle from distance to see the teams tied at three going into the third period.

Colton Kroeker broke in on Whistle early in the third period but this time the Panthers’ netminder was wise to his tricks and turned his shot aside.

Hansen, Herr, Matheson all tested Fick as the home side dominated proceedings but LeClerc in the Stars goal stood tall to keep them at bay.

The Panthers pressure finally told when Jullian Talbot (54.43) swept into a half-empty net after Robert Lachowicz’s effort ricocheted onto his tape.

Kevin Dufour (57.34) tied the game on a late Stars powerplay and the game went to overtime.

The teams couldn’t be separated skating three-on-three, both netminders making highlight reel saves, and a shootout was required.

Brian Connelly, Jake Hansen and Jullian Talbot all hit the back of the net and Jackson Whistle made a strong save on the Stars’ final effort to secure the extra point for The Nottingham Panthers.