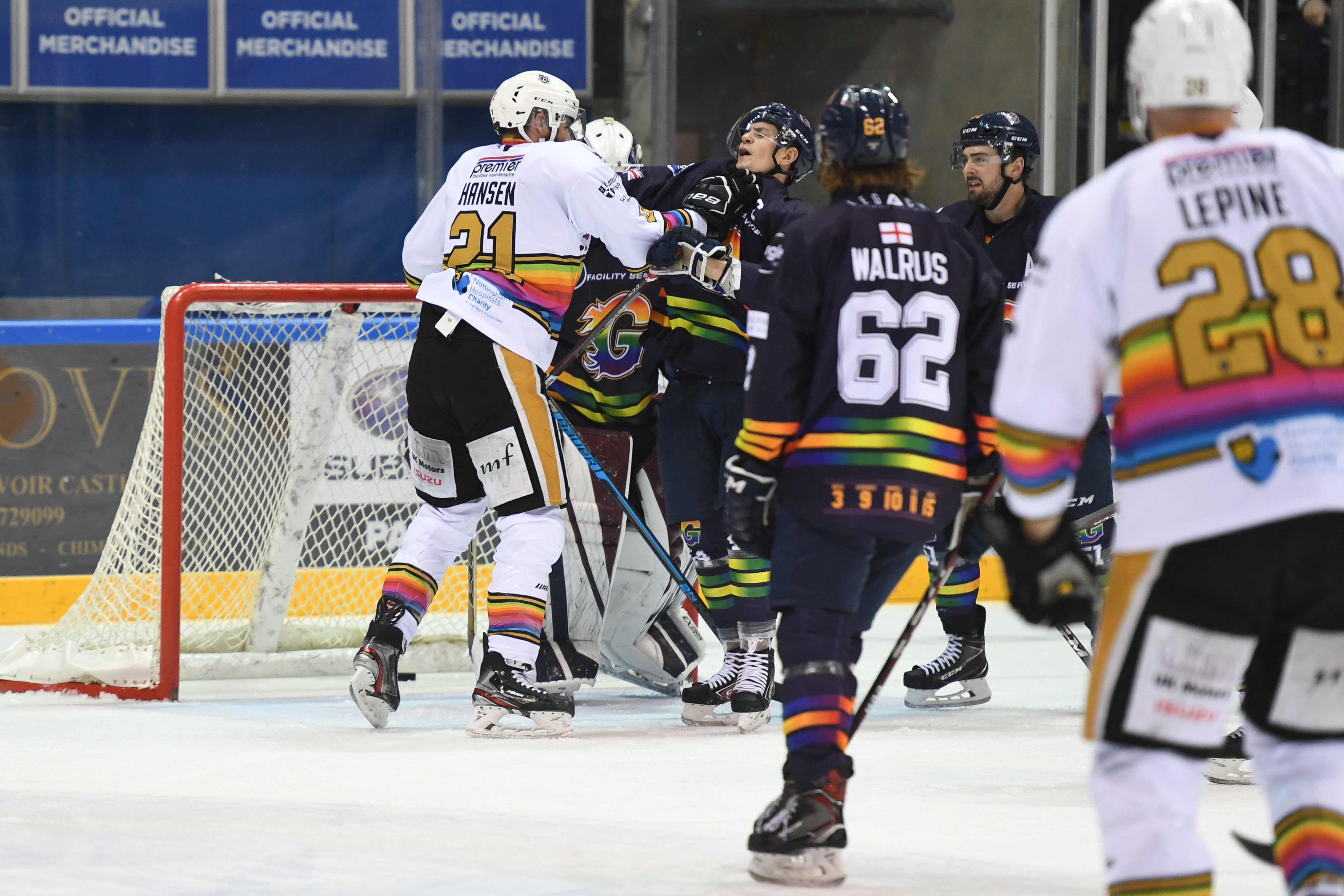 Saturday night hockey returned to the Motorpoint Arena as THE NOTTINGHAM Panthers and Guildford Flames collided on the EIHL’s first ever Pride weekend.

Kevin Carr got the start in goal for the Panthers opposite Travis Fullerton for the Flames.

Georgs Golovkovs and Sam Herr both came close to giving the Panthers an early lead, in front of near capacity crowd, before Kevin Carr had to be alert to perfectly time a poke check and break up a Flames’ two-on-one break-in.

Nottingham made their early pressure count and took the lead when Ryan Horvat (6.53) showed great patience with the puck before finding a shooting lane, firing through traffic and beating Fullerton high on the glove side.

Both sides had to kill penalties midway through the period and the Flames struck inside the final two minutes, John Dunbar (18.47) finishing off a pretty passing play to send the teams into the first intermission tied at one.

The Panthers regained their lead on an early second period powerplay when Captain Sam Herr’s pass to the backdoor (23.09) took a wicked deflection off of a Flames’ defenceman and into the back of Fullerton’s goal.

Just over two minutes later Guildford tied the game back up. Brett Ferguson (25.41) firing in off the post in close.

With Captain Sam Herr harshly sent to the penalty box on a slashing call, after attempting to break up a Guildford breakaway, the Flames took the lead. Kruise Reddick (33.55) beating Carr with a one-timer from the point.

Things got even better for the Flames when Josh Waller’s (36.02) shot from the right wing had eyes and found a way by Carr to make it 4-2 in favour of the visitors, leaving the Panthers with a mountain to climb in the final 20 minutes if they were to get anything out of the game.

DeSantis and Betteridge came close to pulling the Panthers back into the game before the home side had kill nearly two minutes of five-on-three powerplay time for the Flames, Brett Perlini and Danny Fick the men sat in the penalty box, which they did successfully despite John Dunbar’s best efforts to convince the official’s he’d hit the back of the net – a quick video review confirmed the “no goal” call on the ice.

Nottingham gave themselves a chance after returning to full strength when Ryan Horvat (52.22) got his second goal of the game.

There was to be no comeback though as the Panthers, despite lifting Carr in favour of the extra attacker, couldn’t find a way through Fullerton and the Flames took the two Elite League points on offer.