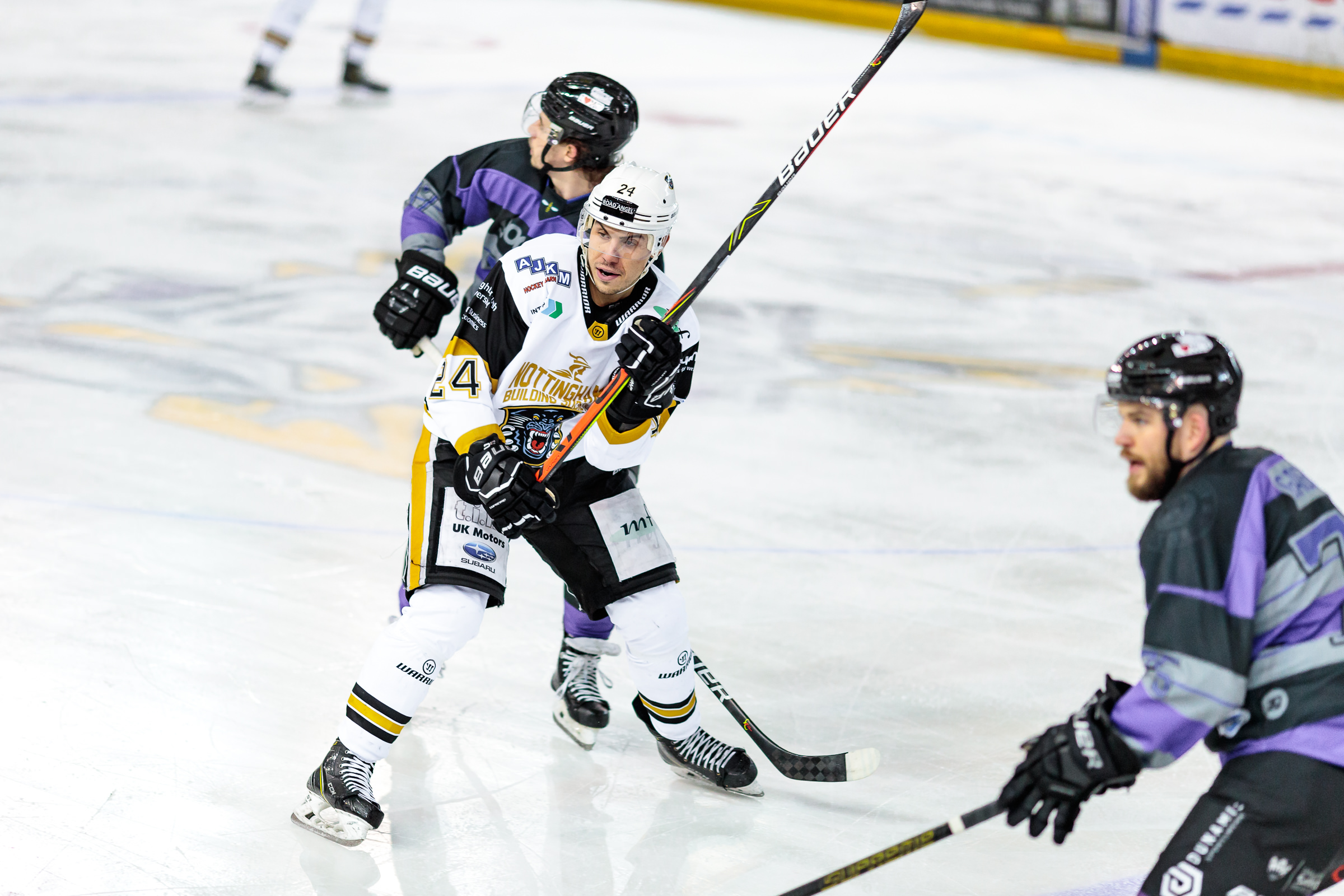 THE NOTTINGHAM Panthers returned to Elite League action, after the Olympic break, on Wednesday night when they made the trip up north to take on the Manchester Storm.

Kevin Carr started in goal for the Panthers opposite Matt Ginn for the Storm.

Both sides exchanged early chances in a frenetic opening five minutes, the games first stoppage in play coming at the 5.07 mark.

Nottingham got the game’s first powerplay when Raymond Grewal (5.30) was sent to the box for delaying the game and Sam Herr (7.08) made the home side pay, the Panthers’ Captain finding a soft spot in the slot from which to fire past Ginn and record his 50th point of the regular season.

Henrik Samuelsson (9.42) tied the game on the Storm’s first powerplay of the night, the former NHLer taking advantage of a Panther’s turnover and beating Carr high on the glove side.

Jake Hansen and Jullian Talbot both had good opportunities turned aside by Ginn before the Storm took their first lead of the night, Frankie Melton’s (17.35) shot taking a deflection on it’s way beyond Carr to send the home side into the first intermission holding a one-goal lead.

Sam Herr (23.49) got his, and the Panthers, second goal of the night inside the first four minutes of the second frame. The American stripping a Storm defenceman of the puck below the goal line before showing great patience to outwait Ginn and fire into a gaping cage.

Ginn denied Fick and Kelsall, after the Storm killed a too-many-men penalty, as the Panthers dominated the play in the second period.

Brett Perlini hit the post on a mid-period powerplay chance for the Panthers just prior to seeing his shot through traffic swallowed by the Storm netminder. Nottingham continued to press on the man-advantage, Jullian Talbot flashing a slapshot just wide, but couldn’t find a way through and Manchester returned to full strength.

Carr made his first save of the period at 34.15 showing he was still alert despite the lack of rubber coming his way, the Panthers netminder coming out to the top of his paint and smothering a shot in tight.

Ryan Horvat (39.02) was sent to the box for interference and it took the Storm just five seconds to restore their one-goal lead, Nottingham failed to clear their lines and Melton (39.07) hit his second of the night to see the Storm lead 3-2 after two periods of play.

The Panthers had to kill an early third period penalty to Horvat as the Storm began the final frame on the front foot.

Nottingham killed the penalty but it was Carr who was the busier netminder to begin the period, the Canadian flashing the glove to deny Simmonds before making a good stick save to send the puck out of play on Erhardt’s shot from the blue line.

Georgs Golovkovs burst through the Storm defence and drew a powerplay (51.23) and the Panthers made the opportunity count when Mark Matheson (52.11) fired a one-timer beyond Ginn to tie the game at three.

Carr made the save of the game shortly after play re-started, the Panthers’ netminder extending his right pad to make a tremendous save on a wide-open Storm forward at the backdoor to keep the game level.

The teams exchanged powerplay as the game wound down but a winner couldn’t be found in regulation and the game went to overtime.

Manchester hit the post, Dylan Malmquist was denied on the doorstep and Carr had to deny Melton on the the breakaway in the extra-period but it would require a shootout to decide the game and that went the way of the home side, outscoring the Panthers two (Fawcett, Ulmer) to one (Herr) in the skills competition to seal the extra point.