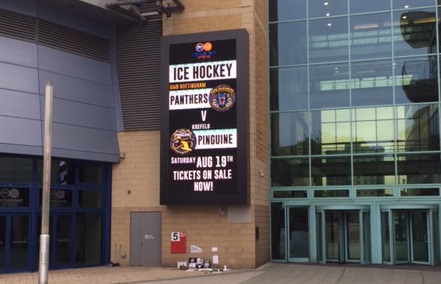 The curtain raisers to the new ice hockey season continue with two home games this weekend starting with an international challenge match clash against Krefeld from Germany on Saturday at 7pm sponsored by Mansfield 103 radio.

Aladdin Cup action on Sunday 4pm sees the visit to Nottingham of the Braehead Clan.

We’re packing more ice hockey into a season than ever before and we’ve started earlier than ever before too. There will be more debuts in the line-up again this weekend, including Brett Perlini who was flying in to the UK this morning.

This early start to the campaign will continue to be reflected in the match night event too as certain new things are brought in gradually. The build-up to face-off light show is being worked on but already the new "ice-wash" with the Panthers logo has been well-received by fans.

The fans were very supportive of the new safety measures which started last week and these will continue throughout the season.

Fans are urged to allow extra time especially at the early games this season to get to their seats. If you are buying tickets on the door - and you will be able to at both games this weekend - please get to the arena in plenty of time.

A club spokeswoman said: “We’ve had very positive feedback from fans. They know the why’s and wherefores behind these measures and everyone has been really supportive."

Meanwhile lots of other things remain unchanged at home games. Regular announcer Ken Feast is back from his jousting exploits and "Sir KEN" will be back on the mike at this weekend's games.

PANTHERS’ VIP desk, is again on LEVEL THREE…that’s one flight of stairs up from the foyer and one flight of steps down from the hospitality boxes. There will be a new intro video for the screens but as usual it is a work in progress and will probably not make its debut until the Elite League opener next month. In the meantime the CHL video is likely to get another run out this weekend.

After this weekend’s games the next home action will be in the Champions Hockey League with visits by Mountfield and Bern on Thursday August 31 and Saturday September 2nd (tickets now on sale).

Saltbox is back in action this weekend with specials for hockey fans going to the games and Shooters Bar will be backing the Panthers' powerplay this season.