New season and new sponsors get on board 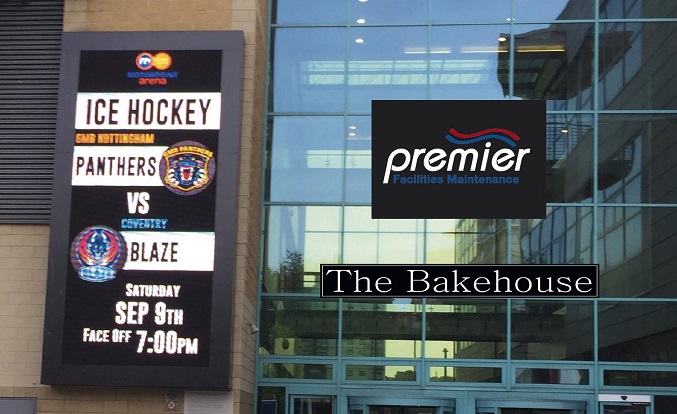 The Elite League faces off Saturday at seven o’clock with Midlands rivals Coventry in town to take on the GMB Nottingham Panthers and the match sees a brand new game sponsor getting involved.

The Bakehouse is an artisan bakery and café on Mansfield Road in Nottingham headed up by Craig Poynter, who used to play the sport and has coached junior teams as well.

Now he is carving out a reputation in the food industry.

MATCH SPONSORS get lots of advertising with the Panthers and round off their evening at the game with the man of the match presentations.

And there will be a different look to the home team bench from Saturday’s match too.

Premier Facilities Maintenance have just signed a deal which sees them ‘get behind the Panthers’ with their giant banner behind the home team bench.

Meanwhile the giant inflatable tunnel should be making its season debut at this weekend’s game too and we’ve got a new gate at the stage end which is being installed on Friday to specifically accommodate the inflatable Paws.

There are new player screen going up for the first time when the Panthers are brought on to the ice and loads more going off on match night.

The fifty-fifty draw will be in operation and the shirt off his back raffle too.

PANTHERS’ VIP desk, is again on LEVEL THREE…that’s one flight of stairs up from the foyer and one flight of steps down from the hospitality boxes. The first full version of the match night magazine goes on sale at the Coventry game

Saltbox is back in action this weekend with specials for hockey fans going to the games and Shooters Bar will be backing the Panthers' powerplay this season.Adult season ticket holders can get a meal deal special from MacDonalds in Nottingham all week long (after 10.30am).