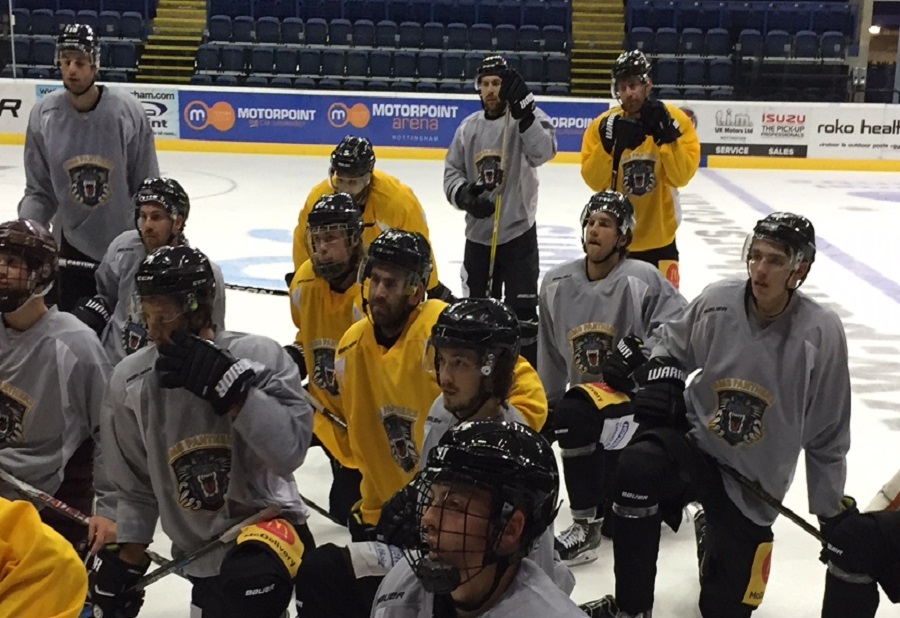 The GMB Nottingham Panthers had a busy schedule for pre-game Friday lined up with on ice practice, a calendar photo-shoot and filming for the last of the CHL documentaries on the diary.

Head coach Corey Neilson said today : “In simple terms, the European adventure is over and out of our systems but will hopefully have a knock-on effect on our domestic play as we concentrate on pushing forward.”

First things first, Panthers need to qualify for the knock-out stages of the Challenge Cup. If Sheffield (already qualified) beat Manchester tomorrow Saturday and Panthers overcome the Clan at the same time, Nottingham will be through to the quarter-finals with a game to spare.

“There’s no doubting it’s a big game,” added Neilson, “We’ll go into with confidence and if the fans get behind us like they did on Tuesday it will give everyone a boost.”

After practice at the arena today (Friday) Panthers Images will be on the ice with the players to record the “beefcake” shots for this year’s calendar. All profits from the calendar (one side action, one side beefcake) will go to our chosen charity this season – The Nottinghamshire Hospice.

The calendar pictures will then be rushed to the printers in time for a production deadline that sees the calendar go on sale alongside the new Yearbook – JUST CHAMPION after the home game on Sunday November 26th when the whole squad will be on hand to sign copies of both.

Meanwhile today, alongside the calendar shoot Lace Market Media will be in the locker room to film the players for the last of their series of Champions Hockey League behind the scenes documentaries. LMM have been with us every step of the way in Europe and they’ve got something special in mind to round off the campaign. The finished film will be out soon.

Tickets for Panthers versus Braehead are on sale now. Saturday at seven o’clock at the Motorpoint Arena. Call 0843 373 3000, visit the box office or buy on-line, just click on the link. Good seats still available.