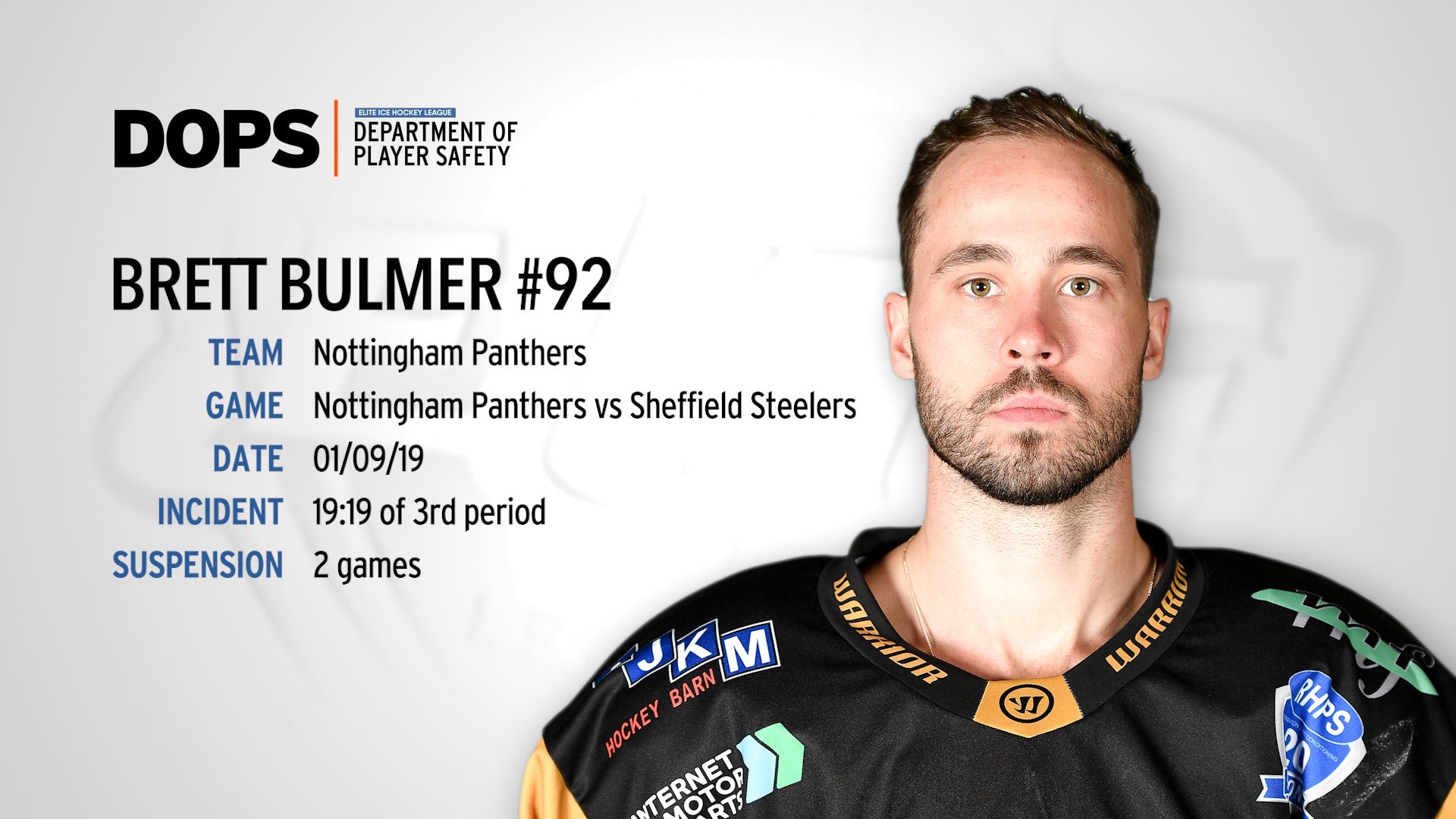 League disciplinary chiefs have been examining a number of incidents after Sunday’s game between Panthers and Steelers in Nottingham.

There were automatic reviews into the five and game penalties called in the last three minutes when Adam Deutsch and Brendan Connolly were thrown out by the referees. After reviewing the video evidence league chiefs have ruled neither deserves further punishment.

At the end of the game there was an incident involving one of the Steelers’ players throwing a goal peg into the stands, the Elite League have suspended Michael Davies for two matches and ordered him to apologise. The Elite League findings and the apology follow:

An incident occurred on Sunday 1 September involving Nottingham Panthers’ #92 Brett Bulmer, during the game between the Nottingham Panthers and the Sheffield Steelers, which is deemed as kneeing. The incident was reviewed by the EIHL Department of Player Safety which determined supplementary discipline is required under Category 1 - 'Careless' - insufficient attention or thought to avoid harm or error. It is liable to happen as a consequence of, by intending to, affect an opponent through a reactionary or accidental motion; or the incident is deemed careless caused by negligence.

After retrieving a loose puck in the neutral zone, Sheffield Steelers’ #52 Nikolai Lemtyugov, circles out to the middle of the ice in an attempt to skate towards his attacking zone. Entering in a cross-ice skating lane directly towards Lemtyugov, Nottingham Panthers’

As seen on the video, Bulmer made a multitude of mistakes which led to an illegal means of contact:

He took the defending zone side of attacking player, went to a gliding wide leg stance immediately before contact, approached at a 90* angle (straight on skating lane) and resorted to a last second reaction type move through the extension of his left knee.

Bulmer must work to approach at an angle, taking the proper skating lane away from the opposing player and make contact through the use of his shoulder or hip only.

It is important to note that this is the 2nd kneeing incident (repeat offender) requiring supplementary discipline in a minimal amount of games played for Bulmer. Although there was no apparent injury on the play, the risk of serious injury is high. Bulmer must eliminate the use of his knee as a means of checking. Supplementary discipline is required, based on the fact of the present incident in question and the fact that Bulmer, due to a kneeing suspension in the recent past, is considered a high-risk player.

Effective immediately, Nottingham Panthers #92 Brett Bulmer is suspended for 2 games: 1 game for the kneeing incident on Sunday 01.09.2019, and 1 game for a repeat offense. 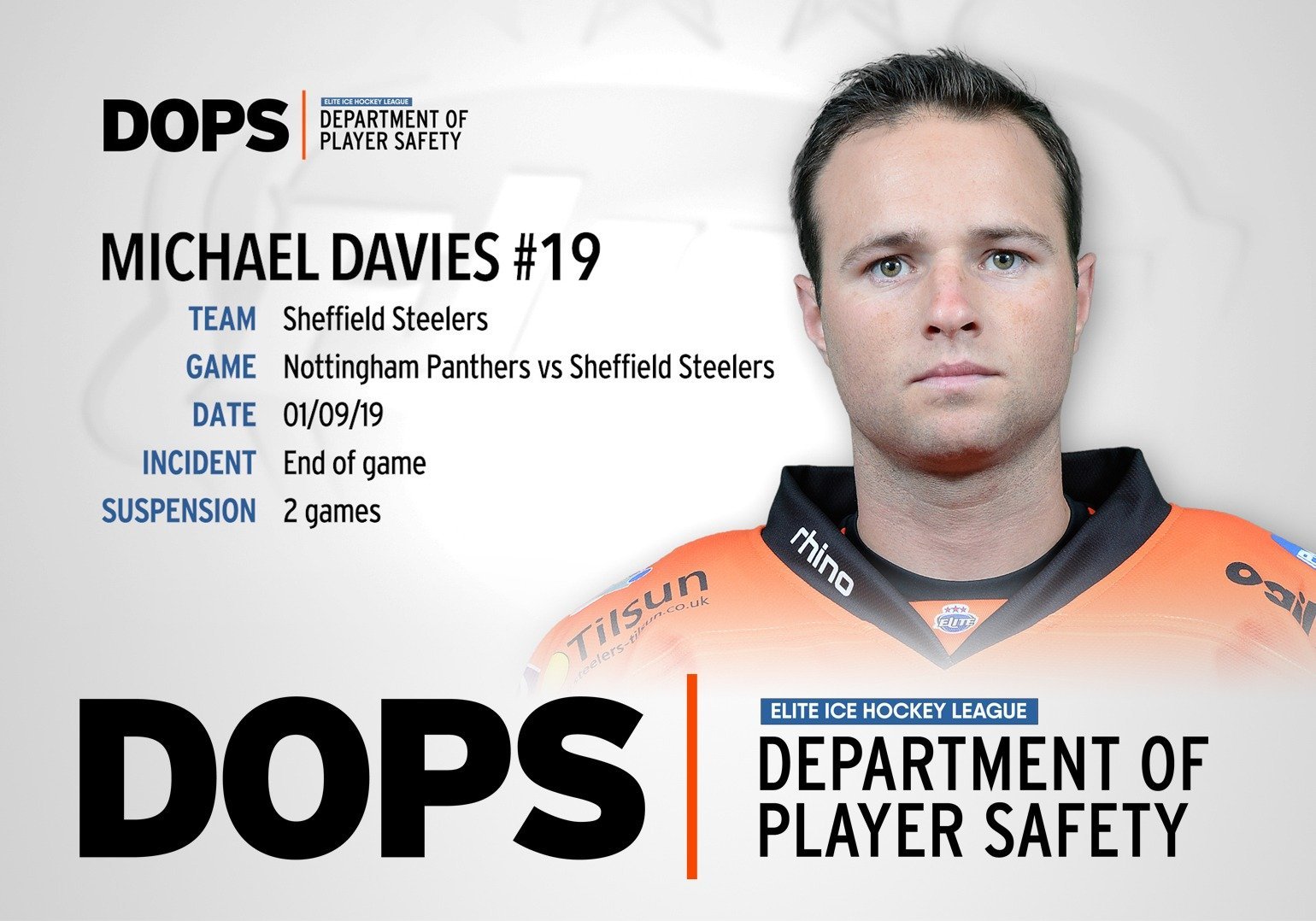 On September 01 2019 in a game played in Nottingham between the Nottingham Panthers and Sheffield Steelers, an incident occurred at the conclusion of the game involving an away team player, Sheffield Steelers’ #19 Michael Davies. The incident was reviewed by the EIHL Department of Player Safety.

Through video footage and numerous reports, the information gathered warrants supplementary discipline for #19 Michael Davies. The reported series of events pertaining to Sheffield Steelers #19 Michael Davies at the conclusion of the game was as follows:

• #19 Michael Davies skated slowly around, and tapped one goal peg with stick aiming it along the ice towards block 6

• #19 Michael Davies then collected the other goal peg and as he was leaving ice at the block 10 Zamboni gates - as he walked off, he threw the peg under arm into block 10 row D

Based on the information stated by #19 Michael Davies in his statement and the numerous statements received by witnesses, the conclusion is that Davies did toss a goal peg. The goal peg was not thrown with force or with an intent to injure. Instead, it showed a lack of control with his personal emotions in frustration at the conclusion of the game.

Davies showed a lack of respect for an opposing team, their fans and the EIHL. All players, including Davies, are responsible for their emotions. Hockey is a game played at a high emotion level. However, at no time are the actions of a player to extend off the ice and/or directed at any fans.

The EIHL takes great pride in the support and fans of the EIHL and in this case, those of the Nottingham Panthers. At no time will a player be permitted to direct negative emotion, or any form of physical actions, at fans.

Effective immediately, Sheffield Steelers #19 Michael Davies is suspended for 2 games, and will be considered a repeat offender for the next 24 months. He is also requested to apologise for the incident. You can see that apology by clicking here.