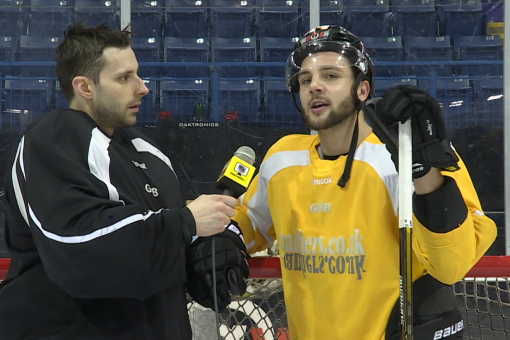 Ollie Betteridge entered the Green Room with Dan Green this week to discuss everything from the Continental Cup, to training some upcoming British hockey youth. When discussing the upcoming game against the Edinburgh Capitals and their continued improvement, Ollie said there're no weak team in the league anymore. He felt that the state of the league in general meant that there is no such thing as an easy game, and that that extended to the Continental Cup games this weekend. When talking further about the Continental Cup ties, he discussed his excitement at taking on teams that they haven't face before: "I'm not sure what to expect but we've got a few bodies back." Dan Green also introduced a new element to the 'In the Green Room series'. Fans can now get involved by tweeting in questions or requesting new guests by using the #AskTheGreenRoom! So get involved #PanthersNation and get your questions answered on the next episode of 'In the Green Room with Dan Green'! To watch the video in full, click on the Panthers TV tab on the right of your screen or click on the link below. Ollie Betteridge in the Green Room with Dan Green: https://www.youtube.com/watch?v=YeYZy_ncKZQ