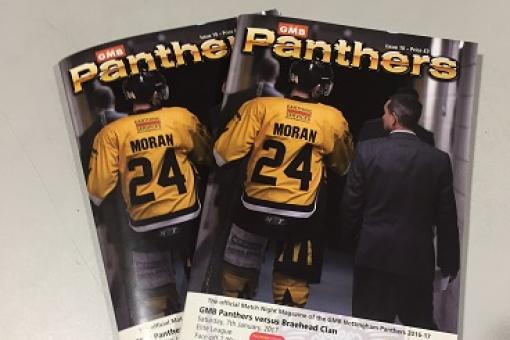 It's another big game for the GMB Panthers at home to the Braehead Clan tomorrow (Saturday) at seven o'clock. It'll be the same line-up for the Panthers with Geoff Waugh and David Clarke still on the sidelines, as they bid to continue their form over the holidays and into the new year. "We're rivals, that's for sure, and it will no doubt show on the ice, every cheer is a boost and every fan in the stands cheering us on boosts our chances," said assistant coach Rick Strachan today. Meanwhile, the shirt off his back raffle and the fifty-50 draws will be in operation again at the game AND there's a new edition of the magazine going on sale too. That includes the story of the young Panthers fan who emigrated to Canada with his family, became a massive fan of Brian McGrattan in Calgary but didn't get to meet him until we invited the family to a training session at the arena during a family visit back to the East Midlands! The magazine and the raffle and draw tickets will be on sale all around the arena on game night. Tickets for the game are on sale NOW! SEE YOU THERE! FANS REMINDER - THE DEADLINE FOR DISCOUNTS AND LOCATIONS FOR SEASON TICKET HOLDERS FOR THE BIG CUP MATCH AGAINST SHEFFIELD IN NOTTINGHAM ON JANUARY 25TH PASSES THIS WEEKEND.