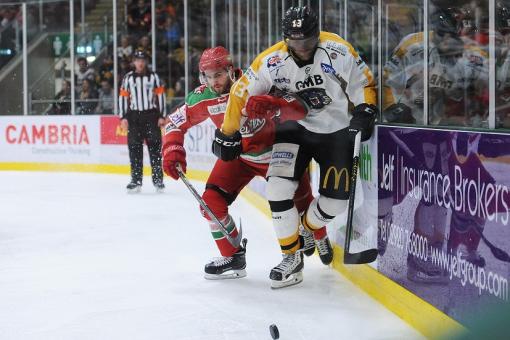 Both sides will be buzzing with confidence when the GMB Nottingham Panthers take on the Coventry Blaze at home this afternoon at four o'clock. Tickets will be available right up until face-off for an Elite League match sponsored by McDonalds. Coventry go into the clash on the back of three wins in a row after they beat Dundee on Saturday by a 4-1 scoreline. Meanwhile Sheffield lost 2-1 at Belfast and the Panthers pulled off the biggest win of the night with an eight goal shut-out at top of the table Cardiff. Nottingham were without injured trio Waugh, Dimmen and Clarke and lost Matt Carter after he scored Panthers' sixth goal just before the half-way stage of Saturday's game. The medical team will be assessing his chances of playing when they get back to Nottingham and it could be a late decision at warm-up. In Cardiff Miika Wiikman was in sparkling form again as Panthers stuck to a gameplan which closed down the Devils' own efforts from start to finish. Panthers had seven different scorers including Matt Carter and Brian McGrattan had his first league goal. You can buy tickets from 0843 373 3000, on line, or from the box office which will be open from nine o'clock right through until face-off. SEE YOU THERE!