Brian McGrattan’s ‘memorable stay’ with Panthers comes to an end 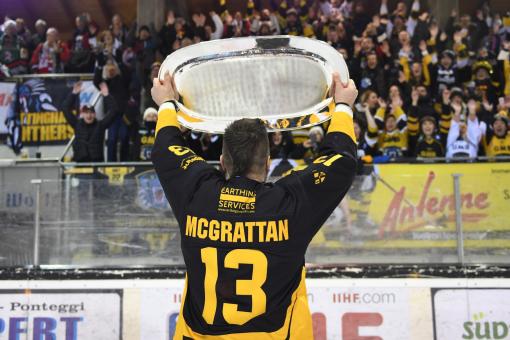 The GMB Panthers and Brian McGrattan have parted on good terms. After lengthy negotiations the GMB Nottingham Panthers are in a position to confirm that former NHL heavyweight Brian McGrattan will not be back next season. Brian signed on a two year deal at the start of last season but successful talks have now concluded and the contract has been terminated today by mutual agreement. Brian leaves the Panthers with the club’s best wishes and our thanks for last season when he played a part in the historic Continental Cup winning campaign in Europe. Whatever the future holds for Brian we wish him well. He was and is a larger than life figure. Few will ever forget his candour and amazing truthfulness when he was interviewed on stage by us in Nottingham after the screenings of the movie about NHL tough guys in which he featured. There has been much speculation about Brian’s future but that will be for him to announce when the time comes, for now we can confirm his time in the black and gold uniform was brief but memorable.