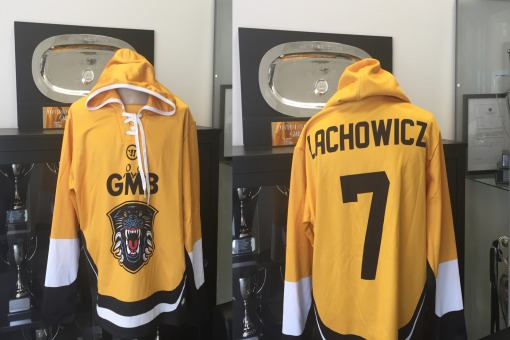 Over the last 36 hours we have been running an auction to sell off a one of a kind ‘Hoockey’ to raise money for the EIHA’s official charity, the Jack O’Donnell Foundation. Jack played his first game of hockey when he was 8 years old, and his career grew from strength to strength. After a couple of seasons at Oxford City Stars, he moved to the Swindon Wildcats. Jack decided to become a professional ice hockey player and left school after his GCSEs in the summer of 2010. He was due to start his apprenticeship with the Swindon Wildcats senior team after the summer holidays. Tragically, during those summer holidays, just as Jack was looking forward to his 16th birthday, he suffered a fatal accident. Despite medical efforts Jack passed away on the 27th of July 2010. The Foundation named in his memory aims to give other children the inspiration and financial support that Jack received, so that they too can achieve their potential in the sport they love. It is also their aim to fund life changing or lifesaving medical treatment to young people who are in great need, just as Jack was. You can find out more about the Jack O’Donnell Foundation here: http://www.jodf.org/ The jersey/hoody combo, with Robert Lachowicz’s name on the back, has received some attention but we’ve also had a few emails asking for the auction to stay open until after payday so everyone can have a chance to bid. We have therefore decided to keep running the auction until next Friday to give everyone as much time as possible to be able to make a bid! Remember to email your max bid into info@panthers.co.uk and you could earn a unique hoockey of which there are no others available!