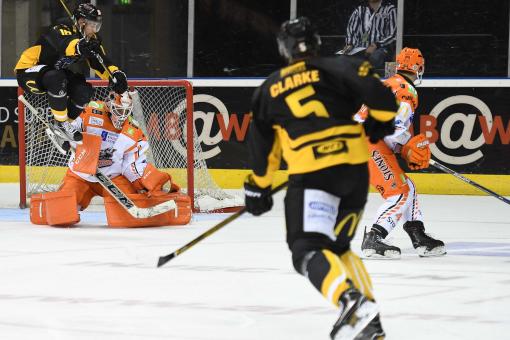 Player assistant coach David Clarke continued on his road to recovery after injury with his first skate in a fortnight today. He was on the ice at Tuesday practice and although the medics made him leave after a limited period of time the signs are there that he is well on the way to rejoining the action. A spokeswoman for the Panthers said today: "We're confident that David may not be sidelined for as long as first feared but a lot will depend on how he reacts to his skate today. "He worked hard on the ice and it's a case of building it up day-by-day. Sunday's home game against Belfast is the target but the reactions and day-by-day re-assessments will determine whether or not that proves to be realistic." Tickets for the GMB Panthers versus the Belfast Giants are now on sale. Face-off Sunday at 4pm By on line (click on the links from the home page), call 0843 373 3000 or visit the box office daily from nine 'til nine. The LOUDER the ROAR...the BIGGER the SCORE! SEE YOU THERE!