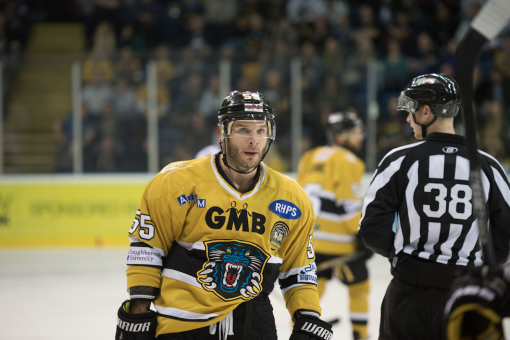 GMB Nottingham Panthers head coach Corey Neilson has drawn up a short-list of heavyweights and more are joining the list by the minute after news came through that charismatic Cam Janssen – often the star of the show last year – had landed a big media job in America and would not be returning after all. A new two year deal was put in place at the end of last season with Cam who was excited and thrilled to be coming back to Nottingham. He was favourite to wear the captain’s “C” this season and highly thought of by the organisation. Said head coach Neilson : “You get curve balls in sport and this one is up there with the best. Cam’s a great guy and he was as good as in tears when he told me what had happened but he’s landed a big job with a sports network on FM radio and will also be working with his beloved St Louis Blues. We’re not the first team to lose an important signing late in the summer, and we won't be the last. It’s happened to us before, it happened last summer and we ended up getting Cam as a replacement then, so it will, as ever, be onwards and upwards and we’ll get on with it. “Cam’s putting together a message for the fans and we’ll relay it as soon as it comes through.”