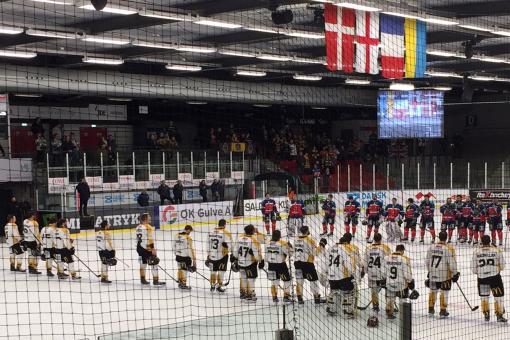 GMB Panthers are on the verge of qualifying for the final of this year's Continental Cup after winning both of their opening games in Denmark this weekend. After beating the hosts Odense and then this afternoon coming out on top against the French side Angers the Panthers head the table with six points. Odense played Ukrainian side Donbass, running out 2-1 winners, this evening and tomorrow Panthers play against Donbass and the French take on the hosts. As it stands right now three teams could yet end up tied on six points each and the "mini-group" would go to goal difference and then goals scored. Two teams go through to the Grand Final. As the hosts Odense won against Donbass, the Panthers are locked into one of those qualifying positions regardless of how they fare against the Ukrainian team on Sunday. To hear the coach's thoughts on the game, listen here to Corey on Panthers radio with Xynomix: http://panthers.co.uk/sites/default/files/1479572256.mp3