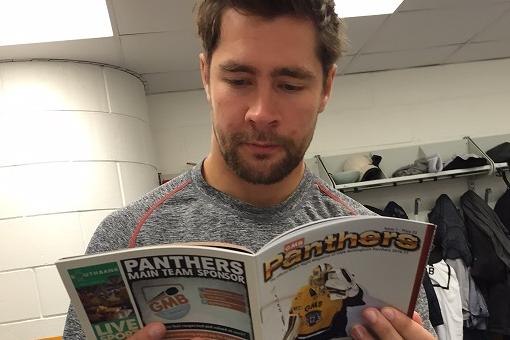 Saturday night ice hockey is back with the visit of the Cardiff Devils to the GMB Nottingham Panthers tomorrow. The game is sponsored by sponsored by FORBIDDEN PLANET ON FRIAR LANE – first for: COMICS, MANGA, STAR WARS, DOCTOR WHO, FUNKO POPS, AND FILM – TV - SCI-FI MERCHANDISE. There are lots of new things to look out for at this season’s home games such as the new shirt off his back raffle, MASCOT Paws will have giveaways from tomorrow’s match sponsors Forbidden Planet, extra interval bouquet giveaways from Flowervision and more. PANTHERS’ VIP desk, sponsored by East Midlands Trains has moved to LEVEL THREE…that’s one flight of stairs up from the foyer and one flight of steps down from the hospitality boxes. Follow the signs to the Panthers’ VIP desk if you need to see us at the game. The new intro video for the screens is a work in progress and we’ve got more to come in that department too…lots more! Saturday games will again feature the players handing bouquets over the glass to fans during the end of match presentations BUT there’ll be a few extra bouquets handed out in the intervals this year. The main giveaway from the whole team will be supported tomorrow by THE FLOWER SHOP, BEESTON. The new season sees a new look match night magazine on sale at the game for the first time and includes a host of exclusive features, profiles, and columns…including a clutch of new features…including not one but TWO player profiles, called INSIDE EDGE and RELEASE THE BEAST find out all about your favourites and more. It’ll be on sale all around the arena (£3). Our picture shows forward Logan McMillan enjoying a sneak preview of the new magazine. After this weekend’s game the next home action is a week on Saturday against Sheffield in the cup, more top action featuring another big rival. Tickets now on sale. A night with the Panthers can be more than just a visit to a sporting event. The games are staged inside the fabulous National Ice Centre. We have parking deals lined up at the Broadmarsh. It’s cheap on a match by match basis for fans, and it’s cheaper still if you grab a parking season ticket. For more information e-mail parking@nottinghamcity.gov.uk After every home game the Panthers' players will be eating meals from Pizzeria Savai, close to the arena. Fans can use their match tickets or Panthers season tickets to take advantage of a “Buy One Get One for half-price” deal at Pizzeria Savai on game days. Match and season tickets can also be used on the Nottingham trams network to get into the game with £2 return tickets. Adult season ticket holders can get a meal deal special from MacDonalds in Nottingham all week long (after 10.30am). The fifty-50 draw is brought to you in association with Temple Printing. A £1 ticket could win you hundreds or more…..you’ve got to be in it to win it! The more tickets you buy – the bigger the prize! And this season sees the launch of the new SHIRT OFF HIS BACK RAFFLE which is just one pound a ticket. The winner will get to visit the player at the locker room after the game for the shirt handover after the end of the game. The shop and the merchandise stalls on the concourse carry a full range of Panthers branded goods. <><><> WE HAVE GOT A LOT OF NEW FANS COMING TO GAMES THIS SEASON. TO HELP THEM - a newcomers guide to some of the rules for the fastest team sport in the word: The rule book is hundreds of pages thick but there are some basics that help newcomers understand what’s going on around them. To start with, its five skaters and a goalie per team. Two skaters on defence, three up front. If the ref gives a team a penalty then the offending player sits in the penalty box. If an opponent takes a penalty at the same time the penalties cancel each other out. Penalties lead to power-plays and penalty-ki