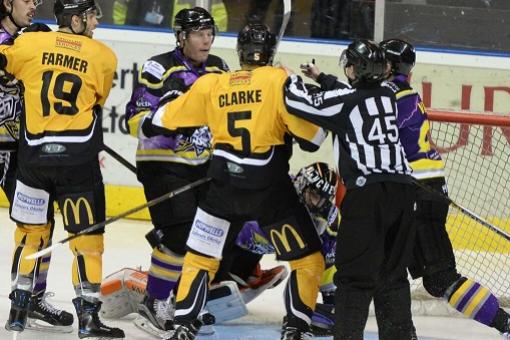 Assistant coach David Clarke says he's ready to return to the line-up and looking forward to Sunday's home game against the Belfast Giants. Tickets for the game are going well and David says on Panthers Radio (with Xynomix) the opposition will be a stiff test for the Panthers. He points out Belfast have had some good results at the start of the new season and they've got guys who are in their second year or more now so they know what the elite League is about. Hear him now, just click on the link on the right. David was on the ice today for his third practice session of the week and says he's confident there is going to be no adverse reaction before the weekend. Tickets for Sunday's 4pm clash can be bought on line, by calling 0843 373 3000, or by visiting the box office, open daily from nine 'til nine. PANTHERS v GIANTS. SUNDAY AT FOUR O'CLOCK. THE LOUDER THE ROAR...THE BIGGER THE SCORE!!!