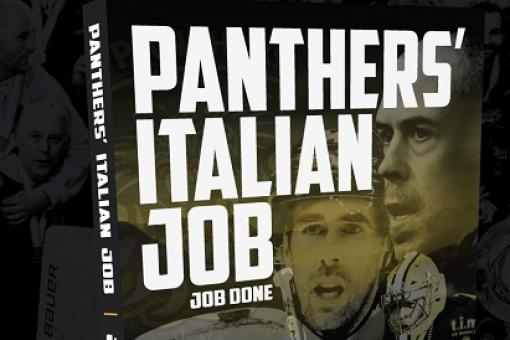 The behind the scenes story of the GMB Panthers' success in the Continental Cup in Italy has been printed and the book is now at the binders. It will be ready to go on sale at the world premiere of the movie of the Super Final weekend which takes place in Nottingham on Monday March 20th at the De Vere East Midlands Conference Centre. The premiere will be a red carpet event with special guests not least fans whose names are being drawn at random from the hundreds and hundreds of survey voters for supporters' player of the year and most entertaining player. Sponsors and other guests will also be at the event which will coincide with the launch of the book - Panthers' Italian Job, Job Done - which is supported by Great Northern Inns (Southbank, Saltbox and Cross Keys). The book and the movie are two very different looks behind the scenes at the achievement of becoming the first ever British ice hockey team to lift a European title. The book also will be on sale at the home games on Wednesday March 22nd and Friday March 24th. It has already earned rave reviews from fans, media and staff who had a sneak preview of the proof copies. The movie is getting close to the final editing stage at Lace Market Media and includes lots of previously unseen footage from the Super Final weekend in Italy. The film premiere is supported by De Vere East Midlands Conference Centre and Orchard Hotel.