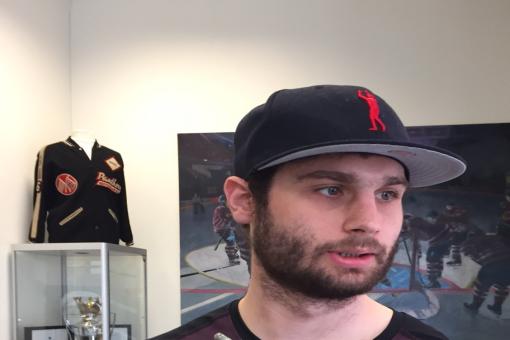 GB international Robert Farmer is back with the GMB Nottingham Panthers. Farms was at the office today to sign his new contract and within minutes we were broadcasting the news and pictures of the signing to the world. The 26-year-old forward had a big year in the Continental Cup winning season last year but has plans to do even more with the club in the coming campaign. Watch the signing now on Panthers TV with the GMB, hear coach Corey Neilson about his excitement at having him back in the line-up on Panthers Radio with Xynomix. Tomorrow Farms will be on Panthers Radio himself. The new season faces-off with challenge fixtures starting on August 12th. Meanwhile season tickets are still available for season 2017-18, which will be Farms’ fifth with the club, at the massively reduced early bird prices: https://www.dropbox.com/s/wq4btmk2z3aubnc/Panthers%20ST%20form%20final%20140317.pdf?dl=0 Watch Robert Farmer re-signing live on Panthers TV: https://youtu.be/m4VSrRrX4O8 Hear Corey discussing the return on Panthers Radio here: http://panthers.co.uk/sites/default/files/Corey%20Farmer%20Returns.mp3