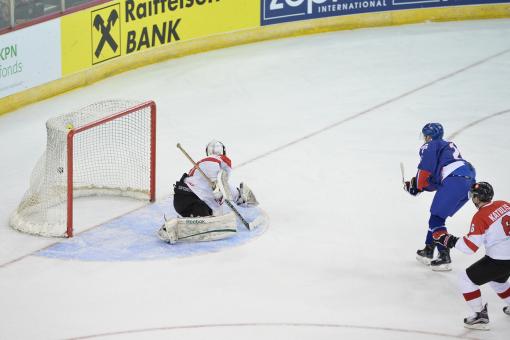 Great Britain made it three wins from three as they beat Lithuania 5-2 to move level on nine points with Japan at the top of the World Championship Division 1 Group B table. Colin Shields moved to within two goals of Tony Hand's modern-era total of 40, while Evan Mosey netted his third goal of the tournament and Robert Farmer got his first. GB went ahead at 1:41 when Shields reacted first to a loose puck on the doorstep (powerplay) to take his total to 38 international goals, but Lithuania hit back within 31 seconds as Arnoldas Bosas ghosted in at the backdoor on a man advantage (2:12). Britain went in front again when Jonathan Phillips - playing in a full visor because of serious facial injury sustained in Monday's victory over Estonia - tipped in Paul Swindlehurst's shot (7:26). GB killed off a short period of five-on-three with Jonathan Phillips and Evan Mosey making big blocks and Mosey quickly turned goalscorer as he stole the puck on the blueline and danced into the zone, beating two players, to fire low for his third goal of the tournament (12:55). Robert Farmer found space in the slot to fire top shelf on the powerplay for his first goal of the tournament (16:15). Lithuania improved in the second period and Emilijus Krakauskas broke free but fired against the crossbar. Ugnius Cizas closed the deficit for Lithuania early in the third session, but Ben O'Connor fired through the five-hole from the slot to make it 5-2 at 47:47. GB return to action on Friday when they face Netherlands at 7:30pm. Pics Dean Woolley