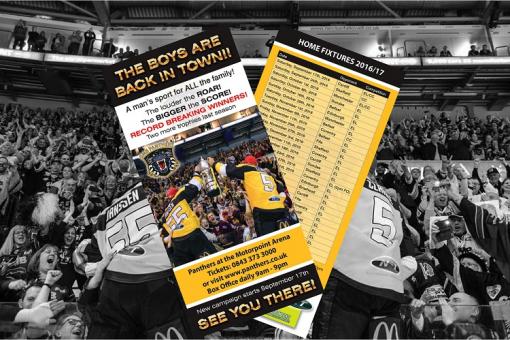 Tickets for the Aladdin Cup game on August 20th at home to Braehead are on sale now. Discounts apply and there's an extra pound off for season ticket holders if they buy their locations before the August 14th deadline. Meanwhile over eight-five-thousand home fixture cards are on the presses at the Temple Printing and will be sent out through letterboxes across the Nottingham area starting next week. Our other leafleting campaigns are also underway in the run-up to the Aladdin Cup game later this month. Panthers have a record number of season ticket holders for the coming campaign. For non-season ticket holders, tickets for the first league game on Saturday September 17th against Cardiff, which also counts towards Challenge Cup standings, go on sale on August 15th. Tickets also go on sale on August 15th for the home stand-alone Challenge Cup game against Sheffield which is on Saturday September 24th. Season ticket holders will be able to take advantage of a one pound discount on their own locations and they will have until close of business on the weekend of the Cardiff game to take up the offer.