FLOWERVISION BACK ON BOARD WITH THE PANTHERS 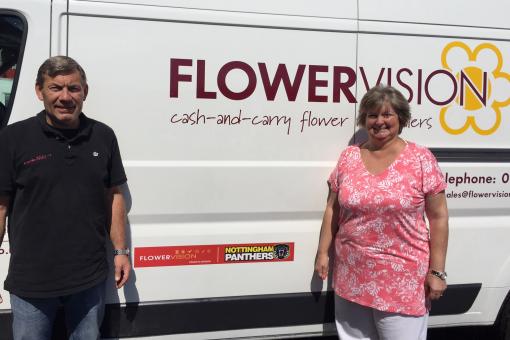 Match sponsors and man of the match ceremony supporters FLOWERVISION will be back on board with the GMB Panthers when the league campaign gets underway in September. It will be a second year for the deal which sees local florists supplying the players with bouquets for Saturday night giveaways throughout the campaign. Flowervision supply flowers and associated goods to shops across the Nottingham area and beyond and the bouquets at Panthers Saturday night home games proved extremely popular with fans last year. Said a club spokeswoman : "We're thrilled to have them back on board, the man of the match ceremonies on Saturdays are unique because of their involvement and the fantastic number of pictures of fans with their flower presents after games speak for themselves." John and Bev are pictured alongside one of their fleet of vehicles which also carry the word on Panthers home games.