Fund-raising gets £300 boost from Matthew and Carla 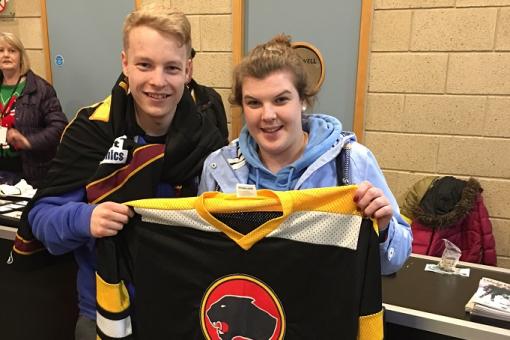 Panthers fund-raising efforts for Headway received a £300 boost when Matthew Wells and Carla Peck picked up Randall Weber's game worn shirt from the eighties at Friday's game. They'd won the snap auction to buy the unique piece of memorabilia which had been donated by a fan to help the club's chosen charity this year. When the hammer went down earlier in the day at £300 the fund-raising efforts topped the £1,000 mark with the big push coming when the Christmas "dressed to the nines" shirts are sold at auction in January. Meanwhile the players will wear their jerseys at the home games on Christmas Tuesday and on New Year's Eve and remember fans have a chance to win a signed regular season jersey as we'll be looking out for the best dressed spectators in the crowd as the New Year celebrations get underway with a three o'clock face-off against Coventry.