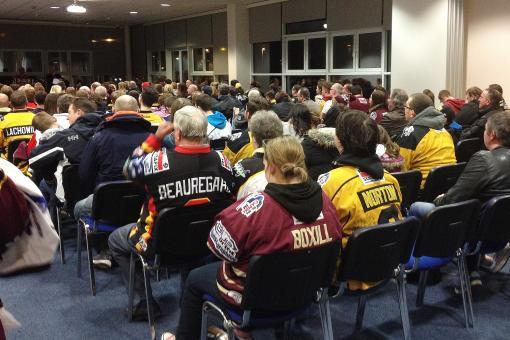 The GMB Nottingham Panthers take on the Belfast Giants today at four o'clock at the National Ice Centre in a match that could have a big say in where the league title goes. Giants are chasing Cardiff at the top of the standings and had a big third period to beat Fife in Northern Ireland last night (7-2). Panthers are looking to bounce back from a narrow defeat at Sheffield (4-2) where they dominated the third period but had their fate sealed by an empty-net goal in the last minute. After today's game Panthers will be auctioning off their white game jerseys )(as used in the shoot-out win against the Kazakhstan team in the Continental Cup Super Final in Italy). We've had a number of commission bids from people who can't be at the auction but there's every likelihood there will still be bargains up for grabs. The players will be on hand to customize your purchases. The auction is on level three at the arena and will start as soon as they players get there after the game. There's no commission to add, the hammer price is what you'll pay. The shirts being sold is the current roster plus Kudroc but minus Deivids Sarkanis. See you there!