GAMEDAY - AND IT COULD BE SO SPECIAL 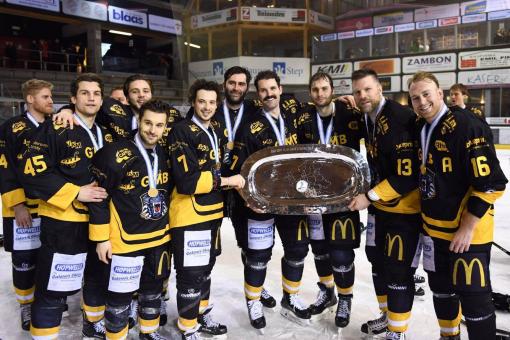 The GMB Nottingham Panthers are in Elite League action against Fife at four o'clock this afternoon. It will be the team's HOMECOMING match after they became Continental Cup Champions of Europe last weekend in Italy. With dozens and more fans promising to be their home-made replicas of the trophy to the game at the arena in Nottingham it promises to be a special occasion in the club's history. Darlings of the Rio Olympics Becky and Ellie Downie will be at the game. The gymnasts will carry out the ceremonial puck drop at the start and will then return to the ice when the Continental Cup trophy is given a military escort for a simple re-presentation ceremony. A club spokeswoman said: "The most important thing today, and everyone knows it in the locker room, is to get two vital league points. "But we couldn't let the club's achievement in becoming the first British team ever to lift a European trophy go unrecognized." The club photographers will have the trophy under Block 18 on the concourse for fans to get special portraits taken (we'll do it again on Wednesday if there's enough demand), the box set of DVDs covering all three games in Italy last weekend will go on sale too, there's a special edition of the match magazine available featuring loads of unseen pictures from Ritten and after the game we have our charity game worn shirt auction in the Bolero Suite. It looks like we're going to have a big crowd at the game today but there are still plenty of seats available. SEE YOU THERE....BE PART OF THE HOMECOMING!