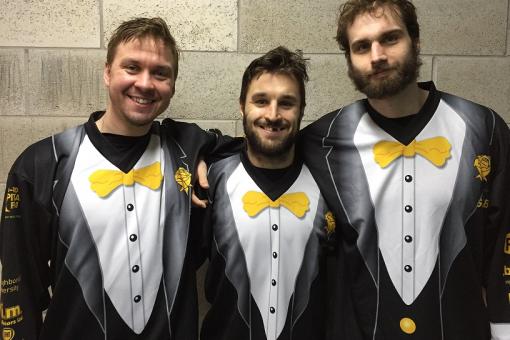 The GMB Nottingham Panthers are hoping to raise as much as possible this Christmas to help Nottingham based charity Headway. Headway funds research and support for the victims of traumatic brain injury caused by sports, car crashes and other events. The welfare of players is always at the front of sports clubs’ minds and we’re hoping fans will join in our fun way of raising much needed funding. In the past our annual “Christmas jerseys” have been kept under wraps until the two games at Christmas and New Year. The players’ shirts are then auctioned off for fund-raising. Last season was a little bit different with the sale of replica seventieth anniversary design shirts which paid for all the shirts worn by the players and helped boost the fund-raising efforts. We’re taking that a stage further this season with 71 replica shirts (one for every year since the club was formed) and they will go on sale starting at this Wednesday’s game in the cup against Braehead. When they’re gone they’re gone. They are an extremely limited edition jersey. Because we have printed shirts this season we’ve been able to utilise the design potential that gives us so we’re getting dressed up for Christmas, as you can see from our photograph, the players will be decked out smartly for the two games at Christmas and New Year. Their playing shirts will then be auctioned off for Headway. One sports injury victim spoke of the help the charity has been able to give him: "During my many years of misdiagnosis with no neurological support, I became seriously depressed and even suicidal at times. I couldn’t work for a long time and people often thought I was lazy. I felt so alone. I wish I'd known about the support Headway offers during my struggles in the early stages of recovery following my brain injury.” And the wife of a young soldier who was hurt in a motorbike crash just before she gave birth to their first child said: “My husband's passion for life has started to come back – something I thought we'd lost forever. He is doing so well and I am so incredibly proud of him. "Our daughter also often says how proud she is of her daddy. She saw him at his lowest, his angriest, and she has seen her daddy’s transformation over time into a smiling person once again who has rediscovered his passion for racing and bringing back trophies." The “Dressed to the Nines” shirts will be available in the foyer, starting at Wednesday’s home cup game against Braehead. They will be worn by the team against Sheffield at the sold out game on Christmas Tuesday and again on New Year’s Eve for the afternoon game against Coventry. As part of the fun we’re asking fans to also dress to the nines on New Year’s Eve. We’ll be posting pictures of fans in their finery on social media and the best dressed will win a signed regular season jersey from the team. Meanwhile the replica “Dressed to the Nines” shirts are available to buy starting at Wednesday’s game. The price? Anything over £50 each. A great cause close to the club’s heart and a great price to get us started with the fund-raising.