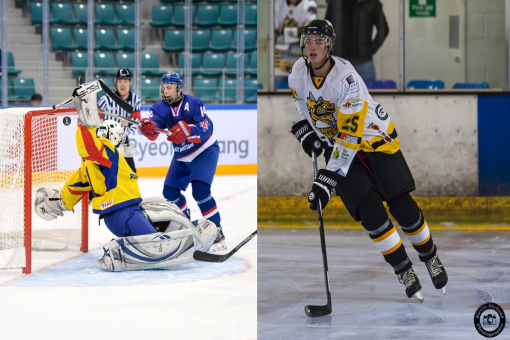 GMB Nottingham Panthers’ head coach Corey Neilson has followed up on the club’s promise to add some emerging British talent to the roster for the coming season. Panthers’ BRIT PACK has always been at the forefront of the club’s progression and the first of the ‘new breed’ has put pen to paper as Neilson looks to develop the next generation of British stars. Teenagers Jordan Kelsall and Josh Tetlow have already trained in Nottingham and the coach says he’s seen enough to give them the chance to succeed at the highest level. Jordan Kelsall Seventeen-year-old forward Jordan Kelsall is from Nottingham and played in the minors last season. Neilson said “I watched him play as he was growing up because he was on my son Cade's team from a very early age. They were both at the academy in Swindon as well, where his game took huge strides. “Jordan is a fine young man from good stock. His father is 6'4" and Jordan is a very hard worker and I think he will grow both in size and as a player. “He has always shown himself to be a person of high character and his ability has grown every season. Last year he played as a top six forward in Swindon on their EPL team and was very reliable.” Josh Tetlow Moving to Nottingham from Bracknell will be 19-year-old Josh Tetlow who already stands at six foot six. Said Neilson: “He's a monster of a young man and could develop into an imposing, tough, defensive defenseman. He came up to train with the team last season and I was very impressed by his footwork for someone of that size. “He is going to be a project but he knows that and is committed to working hard and the process we have explained. One of my favourite parts of coaching is developing young defenseman and I am looking forward to see how quickly we can get him up to speed.” Both youngsters have said they are excited to embark on the next stage of their careers with the Panthers. Picture Credit of Josh Tetlow: Kevin Slyfield