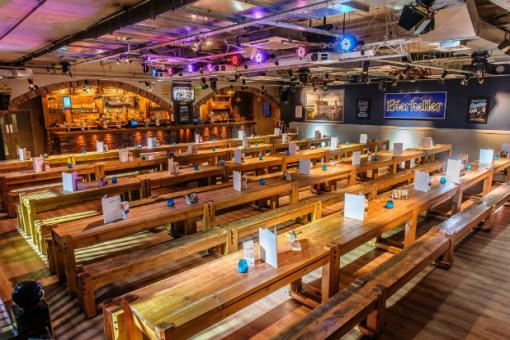 The GMB Panthers are delighted to announce that they have entered into a partnership with new Nottingham bar, Bierkeller Entertainment Complex (BEC). Bierkeller comprises three bars in one venue - the traditional ‘Bierkeller’, ‘Around the World Bar and Lounge’ and the ‘Shooters Bar’. Panthers fans will be able to watch their team in Nottingham’s latest bar and entertainment venue - with all televised Ice Hockey games from the league set to be broadcast live in Shooters. The bar opens its doors today and will become an official sponsor of the Nottingham Panthers for the rest of this season and the next. We will host some events their next season, using their facilities and the largest bar screen in Nottingham. We’re excited about this partnership and look forward to aiding BEC in becoming a fixture of the Nottingham culture. An official spokesman for the club said “We’re excited to work with a major chain like shooters (bierkeller) who have so much success across the country. Their venue will be a fantastic host to some events we have planned for next season!”