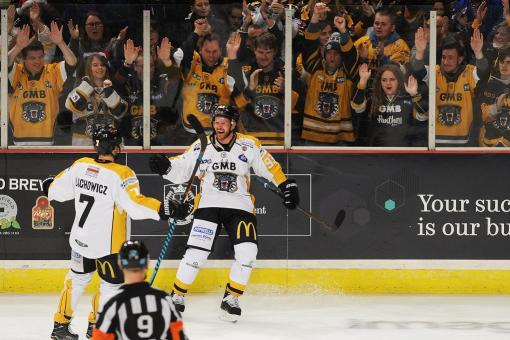 Game winning goal scorer Jason Williams makes his home debut this afternoon in Nottingham when the GMB Nottingham Panthers and the Sheffield Steelers clash for the second time in as many days. It's a four o'clock face-off today in a match sponsored by the AJKM Hockey Barn. Brian McGrattan - another of Panthers' goalscorers in Sheffield on Boxing Day (2-3) - will be hosting some special training days at the AJKM Hockey Barn in February. With a sell-out seven thousand strong crowd already booked in to the National Ice Centre it'll mean more than sixteen thousand fans have watched Europe's biggest rivals over the two Christmas games after nine and a half thousand watched the game in Yorkshire yesterday. Panthers Radio caught up with Jason who revealed he had a good night's sleep after flying in on Christmas Eve but "not so good" on Christmas night ahead of the trip to Yorkshire. He's looking forward to his home debut and is "working on my timing" adding "I'm sure big things will come". Hear his thoughts on Panthers Radio (with Xynomix) right now, just click on the link on the right. Picture of Jason celebrating his first Panthers' goal by Richard Murray. Panthers go into Tuesday's game knowing they will have to work hard against a very good Steelers team if they're to get anything out of the match, but they also know that hard work will reap its rewards as it did in Yorkshire where Logan MacMillan fired Nottingham in front in the sixth minute with the only goal of the first period which saw end to end action and both goalies being kept busy not least during a 106 seconds double-powerplay for Panthers which Steelers managed to kill off. The home side worked an equaliser through the middle channel early in the second period and the two sides were still locked at 1-1 at the second interval. After killing off an overlapping powerplay to the Steelers the visitors regained the lead when MacMillan again threw one on net from the blueline and first Robert Lachowicz and then Brian McGrattan got touches to direct the puck hone at 47.11. Both sides went close to scoring before a stretch pass from Alex Nikiforuk sent Williams in one-on-one and his sweet stick-handling deceived the netminder before firing home hard and low at 55.01. Steelers pulled their goalie early in favour of the extra skater and the ploy worked in as much as they scored off a rebound with 78 seconds left on the clock. They got the extra skater on again for the last minute but Panthers saw off the pressure and had a couple of long range shots on the empty net with no further addition to the scoring.