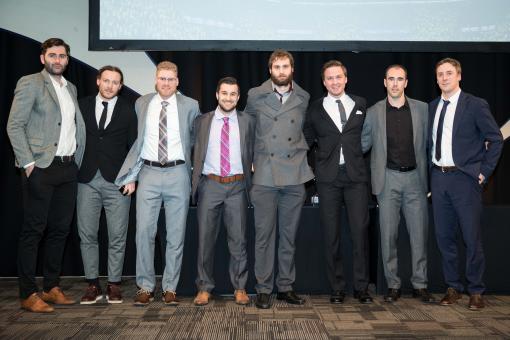 With support from Great Northern Inns, the GMB Panthers hosted their annual awards ceremony this week. At the event at the De Vere East Midlands Conference Centre, the main sponsors the GMB presented the players special championship rings designed and created by Nottingham jewelers Temprell, to honour the club's success in becoming Continental Cup Champions of Europe 2017. The players in turn presented their shirts to their individual player sponsors and then the clubs' "Oscars" were announced. This year's winners, pictured above, were: GMB Player of the Year - Alex Nikiforuk Top Goals Scorer - Chris Lawrence. Most Consistent Player of the Season - (shared) Erik Lindhagen/Andy Sertich Most Entertaining Player - Alex Nikiforuk Top Points Scorer - Stephen Schultz The Gary Rippingale Trophy (Team Spirit) - Alex Nikiforuk British Player of the Year - Robert Farmer Players' Player of the Year - Brad Moran Fans Player of the Year - Robert Farmer Most Valuable Player - Miika Wiikman Our thanks to all our sponsors who were at the awards show and who helped to make it another great night for the club. In particular, our thanks go to De Vere for hosting the event and our awards show sponsors – Great Northern Inns (Saltbox, Southbank and Cross Keys). We were lucky to have Panthers Images at the event and they got some great shots of the event! Check them all out below.