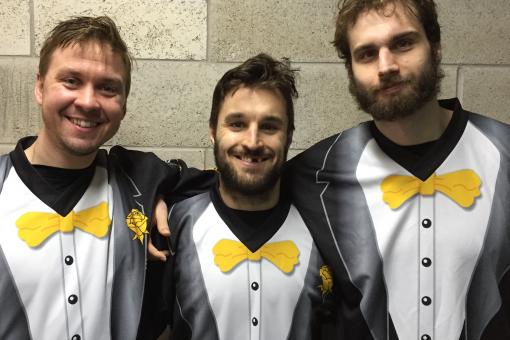 There are five HUGE home games coming up over the Christmas period for fans of the Panthers to enjoy. The action starts on Friday night (7.30pm) with the visit of the sharp-shooting Dundee Stars who put ten goals past the opposition in their last match. GMB Panthers go into Friday’s game (sponsored by VIA – the business telephony and communications specialists) on the back of their second win in as many weekends against top of the table Cardiff Devils. More than two-thirds of the seats in the bowl for Friday night are already spoken for as fans aim to get their Christmases off to a cracker of a start! Game two of the festive home schedule sees arch-rivals Sheffield visiting on Christmas Tuesday (sponsored by the AJKM Hockey Barn). This game sold out a while ago and is always the most popular on the calendar. We are expecting a handful of the so-called “sponsors returns” to go back to the box office this afternoon but most if not all will probably be snapped up by the waiting list for returns that has been drawn up already. It might be worth a shout though if you want to see the highest octane game of the holidays. New signing, ex-NHL star Jason Williams will make his home debut in this match against the Steelers. New Year’s Eve afternoon sees the 'get dressed to the nines in the stands' match for the fans as Nottingham entertain Coventry (match sponsor Champions THE brand people). The three o’clock fixture is again proving popular with less than 1300 tickets still available. The Panthers will be wearing their special tuxedo styled charity shirts for the home games against Sheffield and Coventry which will be auctioned off at a later date for our charity. On New Year’s Eve we’ll be looking out for the best dressed fans in the stands who will be rewarded with a signed regular season shirt. The Hogmanay game against Edinburgh on Bank Holiday Monday January 2nd faces-off at 4pm. This game is sponsored by Great Northern Inns and they will be supporting our chosen charity this year HEADWAY (who fund research and help the victims of brain injuries). This is our traditional face-off time for most Bank Holiday games and this one comes on the last official day of the holidays. (It was mistakenly listed as a later face-off but WILL be a four o’clock start to help families with kids going back to school the next day and adults who are returning to work after the holidays round off the festive period with another cracker of a game). And the New Year proper gets going with the visit of more Scottish rivals Braehead on January 7th - giving fans a chance to shake off the return-to-work-blues with the visit of our biggest Scots based opponents (match sponsors Flowervision). Tickets are available to buy on line by clicking the links from the home page or on the right. You can call 0843 373 3000 or by visiting the box office at the arena in person. IT’S A BUSY TIME OF THE YEAR…..IT’S A BRILLIANT TIME OF THE YEAR…AND WE’D LOVE YOU TO COME OVER TO OURS TO ENJOY CHRISTMAS AND NEW YEAR WITH THE PANTHERS! SEE YOU THERE!