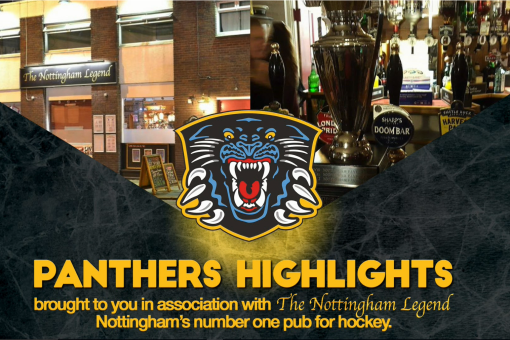 The GMB Panthers returned to Nottingham last night having earned another 4 point weekend with two hard fought victories. First was the visit of the Dundee Stars, who were looking for some revenge after the Panthers beat them in their home opener early in the season. A tough matchup was made tougher still by the loss of some of the highest scoring Panthers forwards. Chris Lawrence was unavailable, one week removed from a EIHL Fans Player of the Week performance against Manchester Storm. In his place however, was a returning Panthers hero, debuting less than a week after his signing was announced. Petr Kalus took to the ice Saturday night and was a key player right from the off. A MOTM performance by Stars netminder Joe Fallon kept the game tight the whole time, but two goals from Panthers MOTM Jeff Dimmen was enough to seal a 2-1 win for the GMB Panthers. For highlights, click on the link below or on the Panthers TV tab to the right of your screen. Panthers Higlights: https://www.youtube.com/watch?v=Sowzy4NScZE Sunday saw the boys in black and gold head to Manchester, in a rematch of last week's 13 goal thriller. The physical edge to the game remained from last week, with both teams happy to throw their weight around to assert their dominance. What did not remain however, were the goals. The third period ended 2-2 and the Storm pushed the GMB Panthers to their first penalty shootout of the season. However the heroics of two Czech's was enough to give the Panthers their second W over the Storm this year. Henry Pacl provided another masterful netminding performance, exactly a week after his MOTM award against Cardiff, and Petr Kalus earned his first MOTM honours of his second stint as a Nottingham Panther, scoring the winning penalty. The next team to visit the GMB Panthers is the Belfast Giants on the 16th of October with a scheduled 4PM faceoff. Make sure you don't miss that one as it will also see the launch of this year's Yearbook and there'll be an opportunity to get your favourite Nottingham Panthers to sign it! Ticket available here: www.motorpointarenanottingham.com/online/Panthers