HOMECOMING GAME WILL BE A SPECIAL NIGHT - Jeff Brown 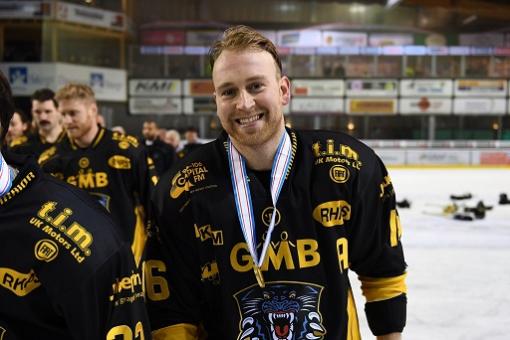 Sunday's homecoming game will be a special night for the GMB Nottingham Panthers but first they get back to the grindstone with a league road trip to Belfast on Friday. (Webcast available to buy via Giants website). Sunday's game against Fife is selling well. Panthers came back from Italy as Continental Cup Champions of Europe and it'll be the first chance for the home fans to applaud them. Speaking on Panthers Radio with Xynomix today, Jeff spoke of his delight at winning a championship "for the first time since he was about twelve years old". But he says the players, back at full training today, are already focused on the domestic action. Hear him now, just click on the link on the right. Sunday's game against Fife faces-off at four o'clock and it'll be a big night. Olympic gymnasts Becky and Ellie Downie will be at the game for the ceremonial puck-drop and the re-presentation of the Continental Cup after the man of the match presentations. Beckie and Ellie were at the Rio Olympics and have won a shed load of medals and awards between them including European and British and Commonwealth titles. After the game the Panthers annual game worn charity shirt auction will take place in the Bolero Suite at the Arena as we raise funds for Headway. The game on Sunday is sponsored by De Vere Venues including the East Midlands Conference Centre and Orchard Hotel. The DVD box set of all three victories in Italy (£15) goes on sale on Sunday and there's a special edition of the match magazine full of stuff from Italy you won't have seen anywhere else. BE A PART OF THE PANTHERS' HOMECOMING. SUNDAY FROM FOUR O'CLOCK. GOOD SEATS STILL AVAILABLE! SE YOU THERE!