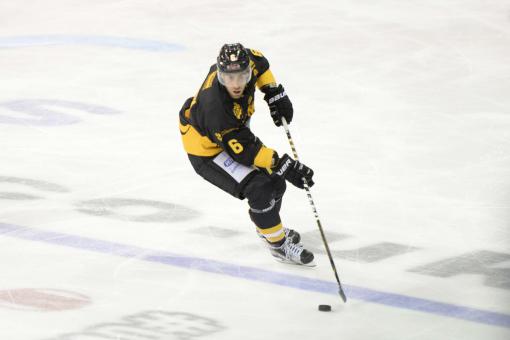 Panthers Radio with Xynomix caught up with Jeff Dimmen after training to talk about the upcoming game against Coventry Blaze. The Panthers have already qualified from the group stage but Dimmen believes there's a lot riding on the game: "We'd like to come out on top in the Challenge Cup and Coventry are trying to get through to the next round." A win for the Coventry Blaze would see them clinch the last spot in Group A of the Challenge Cup as Manchester Storm take on Cardiff Devils. He also views it as an important opportunity to try to reverse the team's fortunes. Dimmen said: "We haven't had a good run of late and we're looking to change that around." In order to change that around, training has been revamped: "We're starting with the basics again, we've gotten away from how we play and everyone's just getting back to work, working hard and getting their noses to the grindstone." Six feet seven inch D-man Kristian Kudroc has been introduced to the team. Dimmen is excited to work alongside the former NHL'er: "He's got a great resume and he's a great addition to our team. We've been a bit thin on D for a while and it'll be great to have another guy join us." To listen to the interview in full, click on the link to the right of the screen or click on link below. Dimmen looking ahead to Coventry: http://panthers.co.uk/sites/default/files/Jeff%20Dimmen.mp3