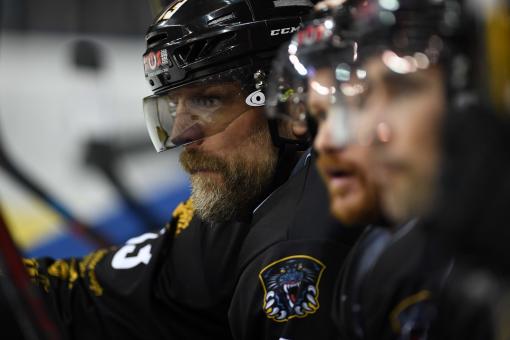 The GMB Nottingham Panthers have organised two special showings of the movie ICE GUARDIANS which features our own Brian McGrattan during his time as an enforcer in the NHL. The movie has received rave reviews for its insight into the game of ice hockey. Our showings will also include a trailer for a new Panthers’ short film being made in the new year, fans will get a souvenir brochure and there will be an opportunity to hear from Brian and other players after the screenings at the East Midlands Conference Centre. The shows are on Wednesday and Friday this week, starting at 7pm. Tickets will be available in the foyer and from the Panthers' desk on Level Three at the game against Edinburgh on Bank Holiday Monday (4pm) or on the door at the venue next week. Said Brian McGrattan: “It’s a great movie and I’m looking forward to sharing it and my memories with the fans of the Panthers”. Pic: Karl Denham