Ice painted and ready for action - fixture news too 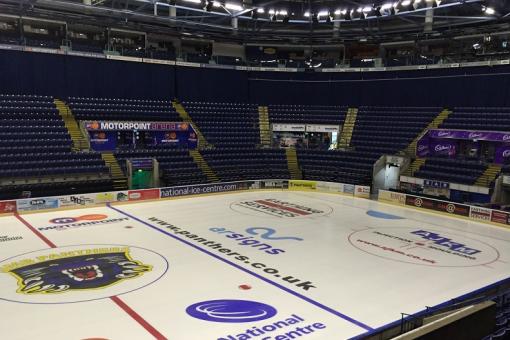 The ice in the main arena at the National Ice Centre has been repainted and is ready for the next GMB Panthers' campaign. A Panthers' club spokeswoman said today: "The ice always looks spectacular when it has just been painted and the arena staff are adding some layers of ice on top to protect it. It may be officially the first day of summer but we thought fans might like a reminder of what it all looks like at the best hockey venue in the country. The big sponsors logos and the game markings are all in place. "Coach Neilson continues work on the recruitment front, more and more names are passing across his desk as he negotiates and bids to fill the last few spots on the roster with the best guys and the best chemistry he can for the upcoming campaign. Even in June it feels exciting already. Season tickets are on sale until the end of this month and we've already set a new record on that front. The full fixtures meeting is at the end of June too, then there'll be a week or two of ratification before they're officially announced. The Continental Cup meeting takes place in less than a week's time too when the groups and the venues will be decided. "Itmight be the first official day of summer but there's lots going on behind the scenes."