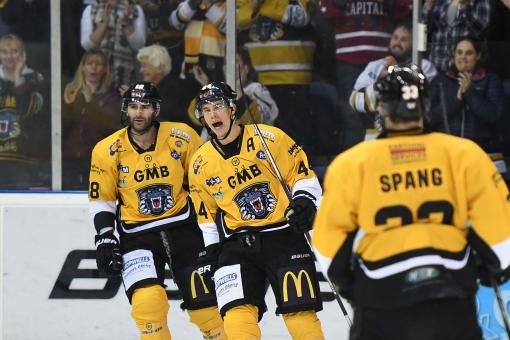 Panthers TV with the GMB caught up with Chris Lawrence after the win over Manchester on Saturday night. 'Larry' had four goals and an assist in the 8-5 final scoreline. Robert Farmer had 1+3, Stephen Schultz +3 and captain Brad Moran 1+2 as the home side shared the points around. The four goal hero was also named man of the match by game sponsors the GMB. See and hear him now by clicking on the link on the right at Panthers TV. Meanwhile head coach Corey Neilson spoke to Panthers Radio with Xynomix after the game too. He reckoned the game was a great spectacle for the fans with a great fight and a hatful of goals but was also something of a "coach's nightmare". You can hear the coach right now - just click on the link on the right at Panthers Radio.