It's gameday - GMB Panthers versus Coventry tonight at 7pm. 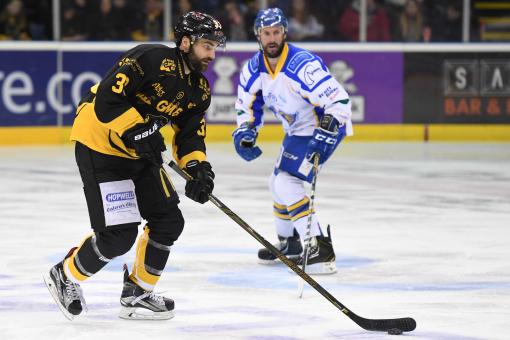 One of the biggest rivalries in British hockey hits the ice as the Panthers host Saturday night visitors and big Midlands rivals Coventry tonight at seven o'clock. Coventry Blaze are gunning for points as they bid to qualify for the play-offs while the Panthers also need to mathematically book their spot in the end-of-season finale. The game is sponsored by Panthers' main team sponsors the G M B. Panthers' new signing Deivids Sarkanis makes his debut. With less than 200 seats available in the bowl at the start of business on Friday for home fans at the National Ice Centre the game is close to selling out. A big atmosphere is guaranteed. The latest edition of the match magazine will again be on sale featuring exclusives and a feature on the Old Market Square Continental Cup celebration night. It's a Saturday game so we will have the Flowervision sponsored fans giveaway with bouquets this week from www.theenchantedfloristnottingham.co.uk PANTHERS’ VIP desk, sponsored by East Midlands Trains is on LEVEL THREE…that’s one flight of stairs up from the foyer and one flight of steps down from the hospitality boxes. Follow the signs to the Panthers’ VIP desk if you need to see us at the game. The next home game is next Tuesday (February 21st) against top of the table Cardiff Devils. Tickets for that one are selling well too but are available. <><><> A night with the Panthers can be more than just a visit to a sporting event. The games are staged inside the fabulous National Ice Centre. We have parking deals lined up at the Broadmarsh. It’s cheap on a match by match basis for fans for more information e-mail parking@nottinghamcity.gov.uk After every home game the Panthers' players will be eating meals from Pizzeria Savai, close to the arena. Fans can use their match tickets or Panthers season tickets to take advantage of a “Buy One Get One for half-price” deal at Pizzeria Savai on game days. Match and season tickets can also be used on the Nottingham trams network to get into the game with £2 return tickets. Adult season ticket holders can get a meal deal special from MacDonalds in Nottingham all week long (after 10.30am). The fifty-50 draw is brought to you in association with Temple Printing. A £1 ticket could win you hundreds or more…..you’ve got to be in it to win it! The more tickets you buy – the bigger the prize! There's also the ever growingly popular SHIRT OFF HIS BACK RAFFLE which is just one pound a ticket. The winner will get to visit the player at the locker room after the game for the shirt handover after the end of the game. The shop and the merchandise stalls on the concourse carry a full range of official Panthers branded goods. These are the ONLY legally sanctioned merchandise outlets. <><><> Even at this stage of the season we have lots of new fans joining us with the crowds continuing to grow match on match. To help them get more from their visit we have a newcomers guide to some of the rules for the fastest team sport in the word: The rule book is hundreds of pages thick but there are some basics that help newcomers understand what’s going on around them. To start with, its five skaters and a goalie per team. Two skaters on defence, three up front. If the ref gives a team a penalty then the offending player sits in the penalty box. If an opponent takes a penalty at the same time the penalties cancel each other out. Penalties lead to power-plays and penalty-kills. One team has to skate short-handed while the other has a man-advantage. If a team scores on a power-play a player serving a minor (two minute penalty) returns to the ice. If he’s serving a major (five minute penalty) his team goes the full five minutes without him or a replacement regardless of whether the oppositi