JOIN THE CITY - CELEBRATE THE CONTINENTAL CUP WIN ON TUESDAY 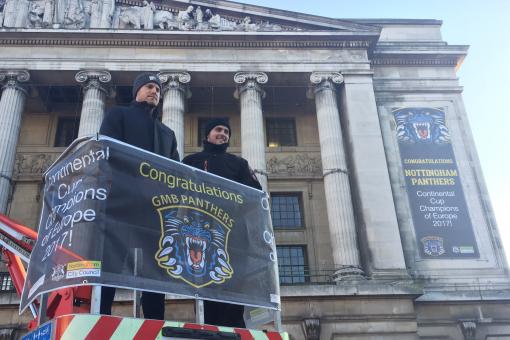 Nottingham City Council will hold a free public event at 6.15pm on Tuesday 7th February to celebrate the GMB Nottingham Panthers historic European victory in the Continental Cup in January. It was the first time ever that an ice hockey team from the UK had lifted a European title. Fans and the public will get a chance to see the full team on a purpose built stage in the Old Market Square in front of the Council House. The Lord Mayor of Nottingham, Councillor Mohammed Saghir, will welcome the crowds before each player is introduced and the whole team line up for photos with the trophy. Fans will also get a chance to meet and take selfies with players. Anyone in a Panthers jersey can also take a discounted ride on the Wheel of Nottingham in Old Market Square from 5pm on Tuesday – fans will get £1 off, making a ride for an adult just £5 and a child just £3. Panthers’ sponsors McDonalds are also offering fans wearing their colours free drinks from their three city centre restaurants to help keep out the cold. The public event will be followed by a civic reception for players and Panthers backroom team inside the Council House, with dignitaries including the Sheriff of Nottingham and the Lord Mayor. Panthers lifted the trophy after a clean sweep of victories at the four team Super Final in Ritten, Italy. The last game decided the outcome of the cup – in its Twentieth Anniversary season and Nottingham beat the hosts 4 – 1 to re-write the sport’s history books. The Nottingham team were the lowest-ranked side when the event started and beat teams from across Europe along the way. The success means Nottingham will compete in next season’s Champions Hockey League starting in August. Councillor Graham Chapman, Deputy of Nottingham City Council, said: “Nottingham is bursting with pride for the Panthers historic victory, and Nottingham City Council is proud to be able to celebrate their achievement with this free public event and banners on our Council House. We want as many fans to come down and celebrate with us as possible! “It’s a massive accomplishment to be the first British ice hockey team to win a major European cup and the whole of Nottingham will be behind the Panthers as they move on to the Champions Hockey League.” Panthers’ general manager Gary Moran added: “Everyone at the club is thrilled to have created history by becoming Continental Cup Champions of Europe in 2017. It’s great to have a Civic Reception from the City to mark the achievement but we are especially pleased that the event has been opened up to our brilliant fans. Hundreds traveled to Spain, Denmark and Italy to support us along the way, thousand more followed the event back home on radio and television. “The fans give the team energy and we’d love to see as many as possible in the Old Market Square to help the City honour the team’s success in Europe.” SEE YOU THERE!