Lacho and Sertich looking ahead to Dundee 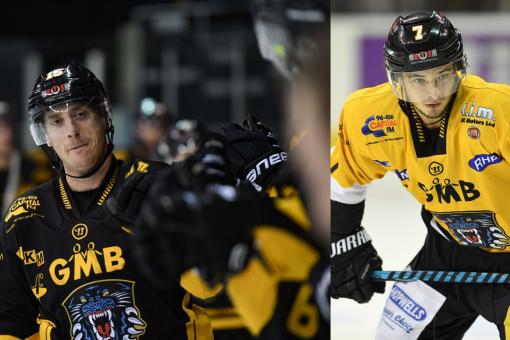 After training today the Panthers media team took the opportunity to talk to some of the team about the game Friday. Dundee visit Nottingham to take on the GMB Panthers in the final game before Christmas. They are flying high after beating the Edinburgh Capitals 10-3 at the weekend. But the Panthers are also coming off a huge win after taking down the table topping Cardiff Devils on Sunday. It means that neither team will be taking the other lightly, as confirmed by Panthers forward Robert Lachowicz when he spokes to Panthers Radio with Xynomix. He said "any team can be tough on any given night. We have to prepare as best we can while looking for a win to take over into the christmas period." The result against Cardiff from Sunday came in the middle of a good run of form for the GMB Panthers, but beating the leaders really boosted the team's confidence: "it's nice to know we can beat the team at the top of the table, it gives us confidence to take forward." Andy Sertich, speaking to Panthers TV with the GMB, said it was really important that the defence were gelling at this point, especially with the visit of Dundee incoming. "Defence is about hard work and we've been working hard all season. Sometimes it doesn't click but now it is." Andy himself has taken on more of a point threat recently and he believes he's benefitting from improved play by the team as a whole: "the team is gelling, we're working some different systems and we're playing better as a team overall." To listen to the interviews in full, click on the tabs on the right or click on the links below. Andy Sertich: https://youtu.be/smJOj519cZ0 Robert Lachowicz: http://www.panthers.co.uk/sites/default/files/Lacho%20Dundee_1.mp3 Both guys are looking forward to the fixture after the reception they enjoyed on Sunday night from the fans. Lacho and Andy both said the crowd spurs them on when they're in full voice. Sertich said it best when he said "the crowd push you over the line when you're a little tired in the third. We're hoping for more of the same friday and we can put on a great show."