Lachowicz: We're honoured to be part of GB 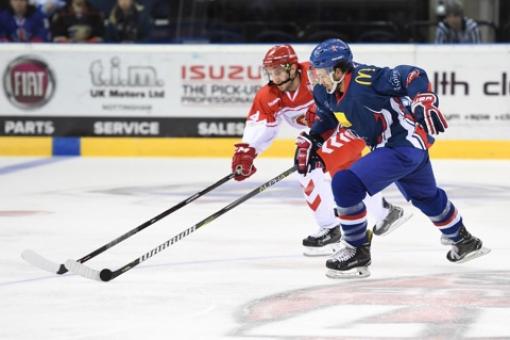 Forward Robert Lachowicz says the Great Britain squad are exciting to get started on Belfast ice after arriving yesterday ready for today's first training session at The SSE Arena. The IIHF World Championship Division 1 Group B gets under way in Northern Ireland on Sunday, with GB beginning against Croatia. They will then face Estonia, Lithuania, Netherlands and Japan in the six-team tournament. After a training camp in Coventry and Milton Keynes, which also included back-to-back matches with Poland at the National Ice Centre and the Skydome, GB will skate for the first time at The SSE Arena this afternoon. "It feels very real now we have arrived in Belfast and we can't wait to get under way," said the GMB Nottingham Panthers forward. "The hotel is very nice and has fantastic facilities and we are close to the rink, which is good. "Playing in any World Championship is special but one on home ice will make it something I am sure we will all never forget. "We have come so close to promotion in the last couple of years and we want to go one better. "It won't be easy as there are five great teams in this group, but we know we have the talent in the squad. "We have a strong roster and some top-class players have not made the squad, which shows the depth we have. "We are all honoured to be part of this roster and want to do the country proud." Shot courtesy of Karl Denham