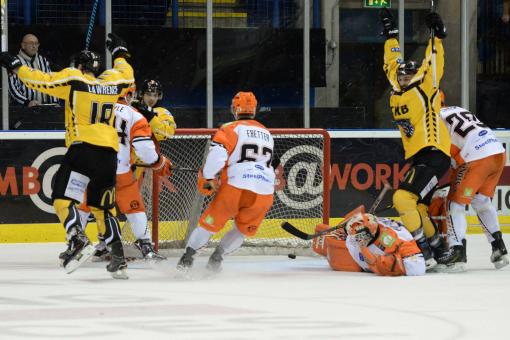 Chris Lawrence scored a last gasp goal to give the GMB Nottingham Panthers what could be a crucial three goal lead (5-2) going into the play-off quarter-final match-up with Sheffield on Sunday. It was a victory built on a great team effort, especially in the first period where Nottingham jumped to a four goal lead. Speaking on Panthers TV with the GMB, Lawrence spoke of everyone playing a big part - "from the goalie out, the defence and the forwards ..everyone gave us a great start". Lawrence spoke too of the Steelers' comeback in the second and third periods and believes it will be a huge game in the second leg - "both sides are going to bring their 'A game' You can see and hear the scorer of Panthers' fifth goal right now just click on the link on the right.