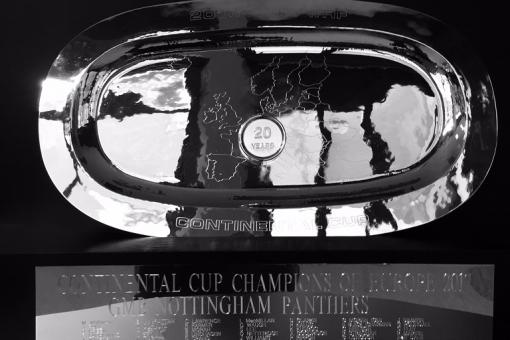 Panthers are hoping to see as many fans as possible at tomorrow’s event in the Old Market Square. The stage show in front of the Council House is due to start around a quarter past six. We’ve already heard of at least three camera crews coming to cover the event live in news shows across the region, with radio and written media also turning out in force. A club spokeswoman said today: “Interest in the event on the back of our Continental Cup success is growing by the hour. We’d love to see the fans there in numbers, it was a tough thing to become the first British team ever to lift a European title but the boys did it. They want to take this event as a chance to say thank you to the fans, and we’re hoping the fans will take up the challenge to show the city how big a sport ice hockey has become.” The success of the GMB Nottingham Panthers in winning the Continental Cup and becoming the first ever UK team to lift a European title will be celebrated by the City of Nottingham at a big open air event in the Old Market Square on Tuesday evening (February 7th). Panthers were the lowest ranked team at the Super Final in Italy where they had a clean sweep of victories beating the hosts, Ritten, Odense from Denmark and Atyrau from Kazakhstan. Panthers had qualified for the Continental Cup by winning last season’s play-offs in Nottingham at the arena. Their European adventure was played entirely on the road in Spain, Denmark and Italy. Tuesday’s event will see a stage presentation show with special effects on a specially built stage in front of the Council House in the Old Market Square. The players and the coaches will be there along with the Continental Cup trophy. The club spokeswoman added: “We don’t know how many fans will turn up, the more the better. We brought the trophy home and it was re-presented on the ice after our next home game but this is going to be special. This is a chance to recognise a massive achievement by the club and show the world what it means to us in Nottingham. “The Prime Minister and the Sports Minister recently added their congratulations to the hundreds and hundreds of messages the team and the players have received. There will be a Civic Reception in the Council House for the players and our guests but the major event will be outside where we can thank our fans for helping us along the way. “Panthers have a rich history of success in the last ten years or so. Fourteen trophies lifted and we’ve flown the flag for Nottingham loud and proud at home and abroad. This event is in Nottingham, for the Nottingham Panthers and our fans. It’s our chance to show everyone what winning a European crown means to us in this great city of ours!” SEE YOU THERE! Tuesday in the Old Market Square from just after six o’clock.