Long but satisfying day in the end for Panthers - coach 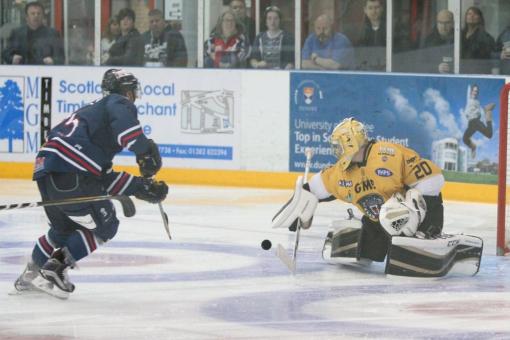 The GMB Nottingham Panthers started the first day of the new Elite League season with a long road trip to Dundee in front of them, a big signing announcement with the news of Brian McGrattan's signature on a contract, and the first game of the new season in Dundee in the evening. There were road delays along the way which made the day even longer for the team and support staff but it ended well with a deserved 1-3 success on the ice and many plaudits off it for the signing news. Netminder Miika Wiikman only faced 26 shots in Dundee and picked up the man of the match award in a game that saw David Clarke - pointless in pre-season action - score two before Jeff Dimmen added a third. Panthers' head coach Corey Neilson said afterwards (speaking to Panthers Radio with Xynomix in an exclusive end of match interview) it had been great to start the league campaign with a win. He thought his team started sluggish after the journey but then picked it up...later taking their chances....and finally battling through the calls in the third where they had to see off a lengthy two man advantage to the home side. Hear him right now, just click on the link from the home page. Saturday night Panthers are in Braehead, Sunday they move on to Fife. Next Saturday (September 17th) sees the first home league game of the campaign when the Cardiff Devils visit Nottingham. Tickets are on sale now. The match also counts towards the Challenge Cup round-robin section. Sheffield visit in the cup on Saturday the 24th in a game that is NOT on the season ticket. ST holders have until close of business on the Cardiff weekend to claim their locations and a one pound discount. Pics: Al Goold