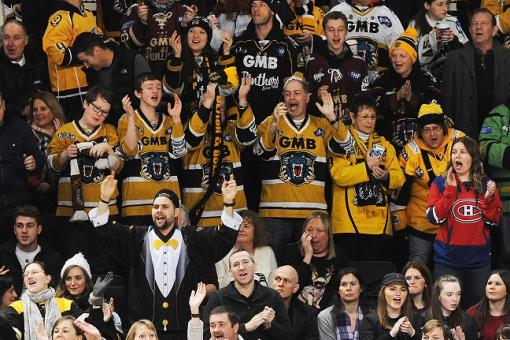 Tickets for today's home game against Sheffield sold out weeks ago and as usual the Christmas clash between Panthers and Steelers became the hottest festive ticket in town. But there are still seats available for the ever-popular New Year's Eve game against Coventry. The three o'clock face-off is designed to suit all plans whether you're going back home for a quiet one in or on to a club or a party, Panthers versus Coventry is the best way to start your New Year's Eve celebrations and thousands agree judging by ticket sales so far. Our Hogmanay game against Edinburgh on Bank Holiday Monday (January 2nd) is also a great way to end the holidays. With everyone heading back to work or school the following morning it's scheduled for a four o'clock start. Tickets for both those games are selling well but are still available. You can grab one while you're at today's game from the box office. There will be a shirt raffle at today's big game and the winner will be presented at the locker room after the match with one of the game-quality Christmas design shirts by one of the players ruled out through injury or illness. The "dressed to the nines" designs are unique and there is just one shirt made in each player's name and number. Down the road the game worn shirts will be auctioned off to raise funds for our charity HEADWAY, so to maximize that fund-raising effort we will be allocating either the Clarke, Green, Dimmen or Waugh shirt for today's match day shirt raffle. Also available at today's game will be the last of the 2017 Panthers Calendars and Yearbooks and also on sale are the tickets for the Brian McGrattan ICE GUARDIANS movie shows on January 4th and 6th where the movie described as "totally awesome and a must see for all hockey fans" will be shown alongside a chat-show and a Panthers new short film.