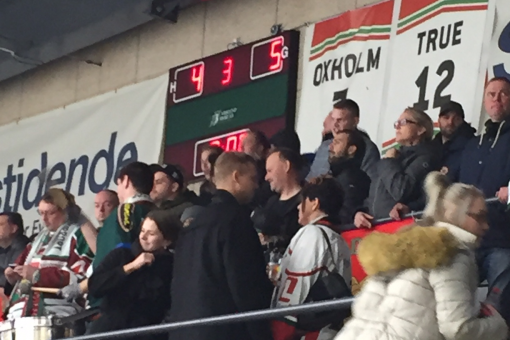 Panthers Radio with Xynomix caught up with Panthers coach Corey Neilson post game after an exciting game of ice hockey. Coach said "It was a seesaw battle... we dictated possession and controlled the game in the beginning. they took it back towards the end." When discussing the positives in the performance, Corey was delighted that some of the systems that aren't working in the EIHL anymore are having success in Odense: "The face-offs we used in England that don't work anymore we got to use here and they worked." One surprise for fans this weekend was the temporary return of Petr Kalus. After having been released last week, Petr was still eligible due to having been part of the Panthers squad in the 2nd round. Corey discussed approaching him to help an cover some injury issues this weekend: "Petr Kalus thought long and hard about whether he'd come back and he decided the Panthers had been good to him and he wanted to work hard and do well for us. And he really did." So well in fact that he came away with the MOTM award for the Nottingham Panthers coming away with multiple points for the team. Sadly it wasn't all good news for the GMB Panthers: "It wouldn't be a panthers season without a goaltender getting whacked. Thankfully we have young Henry and he came in and made some big saves." Despite a strong performance in the first two periods, the game ended up being very close with the Bulldogs scoring in the final minute to make it a one score game. To listen to the interview in full, click on the link below.