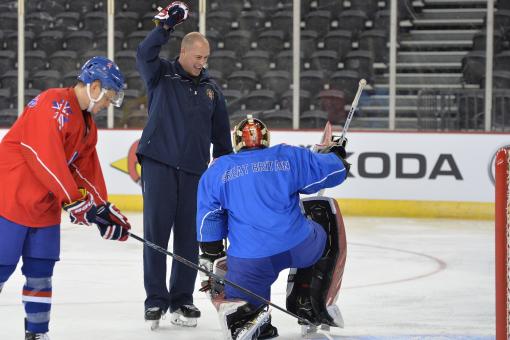 Great Britain assistant coach Corey Neilson says the attitude of the squad is very positive with one day to go until the start of the IIHF World Championship Division 1 Group B in Belfast. The UK will host its first men's World Championship tournament for 25 years when the six-team competition gets under way on Sunday. GB's first game is against Croatia tomorrow before they face Estonia, Lithuania, Netherlands and Japan. Britain had their first training session at the SSE Arena on Friday. Panthers' head coach Neilson is a big part of the GB set-up and said: "It was good. The boys look pretty fast. "It is a really positive group and they are really happy to be on the ice. "We have a good group. The D are moving the puck well and the forwards are looking impressive." This is Neilson's second spell as assistant coach of GB and he says it is fantastic to be back involved. "Pete (Russell) makes it fun, it's a special gift of his," continued Neilson. "Every time we come to the rink we have a good time, but at the same time we put things down that the guys have to follow. "We have a good self-policing and accountable group and they are working hard.”